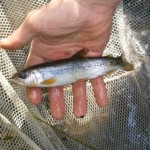 A cutthroat trout is counted and measured in newly accessible habitat in Hooper Creek.

When Sierra Pacific replaced an inadequate culvert with a 45-foot bridge over a tributary to the Skagit River, enough sediment had accumulated behind the fish barrier to fill 30 dump trucks.

Biologists with the Skagit River System Cooperative (SRSC) monitored the channel, habitat quality and fish distribution before and after the 2008 culvert removal in Hooper Creek near Concrete. SRSC is the natural resources management arm of the Swinomish and Sauk-Suiattle tribes.

Forest and fish biologist Mike Olis was pleasantly surprised to discover an increase in habitat quality downstream of the project area. A year after the bridge was built, Olis counted almost three times the number of the large pools (with at least 3 square feet of surface area and 1 foot of residual depth) fish need to feed, rest and stay cool.

“We were expecting some pool-filling from the released sediment,” he said. “The increase in pools is good for the fish.”

Hooper Creek’s resident cutthroat trout quickly took advantage of the newly accessible habitat. In 2009, a year after the project was completed, surveys found 23 trout above the new bridge, including one as far as about a half mile upstream. In 2010, there were 137 fish. Of those 101 were younger than one year.

Coho also spawn in Hooper Creek, but year-to-year spawner surveys don’t necessarily reflect changes in habitat following the culvert removal because run sizes vary. More coho were seen spawning after fish passage was restored, but there also was a larger coho run that year. What the numbers do show, however, is that the release of 300 cubic yards of sediment didn’t have a negative effect on coho spawning.