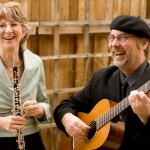 The Arlington Arts Council will present two shows to brighten up the dark winter days in the Romantic Winter Music Festival on two Saturdays in February.

On Saturday, Feb. 9, Last Leaf Productions will offer “Sweet and Hot,” a musical revue originally conceived by Julianne Boyd to showcase the musical works of Harold Arlen, a prolific composer from 1930-1970.

Together with popular lyricists including Ira Gershwin, Johnny Mercer and Truman Capote, Arlen wrote hundreds of songs that have become standards in American music. His work includes “Get Happy,” “Stormy Weather,” “Let’s Fall in Love,” and the songs from The Wizard of Oz including “Somewhere Over The Rainbow.”

Terence Alaric Levitt is music director and accompanist for the show. A composer himself, Levitt has written many shows produced in the Seattle area and in California where he studied music and composition. He will be joined by Keith Ruby to fill out the musical accompaniment for the show.

On February 16, the Grammy Award-winning duo Eric Tingstad and Nancy Rumbel return to Arlington for their first local performance since the grand opening of the BPAC in 2007.

Tingstad provides Americana finger-style guitar which is complemented by Rumbel’s wistful high-toned oboe floating gracefully above Tingstad’s gently swirling hypnotic guitar lines. On some pieces Rumbel plays English horn, and she adds a jig flavor with a peppy ocarina, which is much like a penny whistle.

The duo has released many albums, including Acoustic Garden, The Gift, Woodlands, In the Garden and Legends.

Tickets are $15 and can be purchased in advance online at brownpapertickets.com and at Flowers by George, 335 N. Olympic Ave., in downtown Arlington. Remaining tickets will be sold at the door.