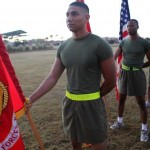 Sgt. Delshayne John speaks fluent Navajo, serves as a communications Marine and credits his decision to serve in the military to his upbringing on the Navajo reservation in Fort Defiance, Ariz., and the influence of his grandfather, Jimmie M. Begay. Begay served as a Navajo code talker during World War II. Photo by Sgt. Ray Lewis/Marine Forces Reserve/DoD/Dvidshub.net

What makes Sgt. Delshayne John stand out from his fellow Marines at Marine Corps Support Facility New Orleans isn’t the fact that he rose through the ranks to be meritoriously promoted to sergeant in less than three years.

It isn’t that he is only on his first tour and already works directly for a three-star general. It isn’t that the 21-year-old, 175 pounds packed into a lean 6-foot-2 inch frame, is an experienced rodeo rider, basketball and football player, wrestler and cross country virtuoso.

What makes John different is his Native American heritage. His two great granduncles or as he refers to them, grandfathers, Leonard Begay and Jimmie M. Begay, served as Navajo code talkers during World War II.

John, who speaks fluent Navajo, serves as a communications Marine and credits his decision to serve in the military to his upbringing on the Navajo reservation in Fort Defiance, Ariz., and the influence of one specific grandfather, Jimmie M. Begay.

“My dad left when I was three and he (Jimmie M. Begay) has always been there for me so he has been the father figure in my life,” said John.

There is always something to do

Traditional Navajo houses made of wooden poles, tree bark and mud, called hogans, and trailers sparsely populated the valley overlooked by mountains. There were no amusement parks or shopping malls, just families engaged in their daily chores and livestock roaming the plains.

In one trailer, John, his three younger brothers and his sister lived with their mother – no electricity and no running water. His grandfather and grandmother lived in the next house down the road.

In the absence of John’s father, Begay took it upon himself to groom John into a respectable young man, filled with the Navajo traditional values and able to take care of his mom and siblings as the man of the house.

John described his grandfather as very stern. Granddad’s rules: you don’t sleep in, you rise before the sun, you run towards the east every morning, pray and come back.

“You can’t be lazy,” he said the old veteran used to insist. “There is always something to do.”

Even after John completed his chores, sitting back and relaxing in the house wasn’t an option. Begay pushed him to go outside and play with his siblings or find something productive to do.

Begay trained his grandson to do many things, from fixing cars to taming horses.

John remembers when he got his first horse. Several wild horses roamed the reservation. The rule was whoever caught them, kept them. As John explained it, the problem was not with catching the horses but taming them. Begay caught a wild horse and domesticated her, and when she had a baby, Begay gave the foal to John.

“He taught me how to do it then he said ‘here’s your horse, now break it,’” John said.

“I just never felt like I could be bored with him, no matter what we were doing he always had something to teach me,” he added.

The two bonded over chores and many of the reservation activities: hunting, branding cows, feeding the family animals, rodeo, etc.

As John grew older and the responsibility of taking care of his younger siblings became greater, so did the stress. He couldn’t show any weakness or emotional vulnerability as the man of the house – not to his younger brothers and sister – but he knew he could always confide in his grandfather.

“We got pretty good about reading each other,” said John. “Anytime I needed somebody to talk to, he was always there for me so he was like my shoulder to lean on.”

In 1942, the Marine Corps began recruiting and training Navajos for code talking because they spoke an unwritten language, unintelligible to anyone except another Navajo. Navajo Marines developed and memorized codes which, it is believed, the Japanese never cracked. They became America’s answer to the Japanese interception and decryption of indispensable messages during World War II.

Begay served in the war as a code talker and it was his stories about serving in the military that opened John up to a world outside the reservation and the Marine Corps.

“What really got me is the bond that he built with a lot of different people and that he got to travel,” said John. “I just saw what kind of person it made him and I envied him and wanted to be like him.”

Begay passed away in 2006. John was still a teenager coming of age, 15 years old.

His grandfather had always hinted that he wanted John to join the Marines but never pushed him, John said. In his last days, Begay finally admitted to John that he wanted him to join, but he encouraged him to pursue whatever he was passionate about.

“That just kind of sealed it for me,” John said about his decision to enlist.

John graduated Navajo Prep High School in New Mexico in 2009. He left for the Marine Corps that same year.

Marine Corps recruit training has a reputation of being physically challenging. John, whose active youth read like an ironman competition – wrestling, playing basketball, football, running track, wrangling cows and riding bulls – was prepared for the physical aspect. It was the emotional isolation he wrestled with.

“The hardest part was being away from my family,” he said. “It was the first time I left the reservation.”

He earned his eagle, globe and anchor and became a Marine Jan. 19, 2010, at Marine Corps Recruit Depot San Diego.

The newly minted Marine’s first duty station was Marine Forces Reserve headquarters in New Orleans, where his fellow Marines say his grandfather would be proud.

“No doubt his grandfather would be proud of him, very proud,” said Cpl. Travis Ortega who works with John in the MARFORRES G-6 Communications and Electronics Division, and was with him in boot camp, Marine Combat Training and communications school.

Pfc. John arrived in 2010 and was placed at the G-6 service desk, the first stop for troubleshooting information technology systems. He made it his mission to stand out, and eventually, callers were requesting John by name. He also worked in several other sections of the G-6, earning a reputation as the go-to-guy wherever he worked.

“If you need something done, he is the guy to go to,” said Ortega. “No matter if he’s never heard of it or seen it before, he’ll find a way and figure it out for you.”

When MARFORRES moved its headquarters from New Orleans proper to Algiers, La., in 2011, John was added to the team in charge of setting up communication equipment for the new building.

After consistently proving himself a valuable asset during his young career, he was selected for a highly-coveted but demanding position to work directly for the MARFORRES and MARFORNORTH commander, Lt. Gen. Steven Hummer, and his staff.

In August 2012, Hurricane Isaac hit New Orleans and Marines had the option of voluntarily evacuating. At the same time, Hummer’s MARFORNORTH was tasked with supporting the Republican National Convention, so the general remained in New Orleans. John stayed back also – to make sure the general and his staff had all means available to communicate.

Personnel were shorthanded, the general needed updates, video teleconferences had to be set up and broken equipment needed fixing. John tackled the issues by day, and stood watch outside the general’s office at night.

“When you have generals on deck, nobody is not going to not stand post,” he said.

For his actions during the hurricane, John received a Navy and Marine Corps Achievement Medal. Those who knew him and worked with him weren’t surprised.

“You can always rely on Sgt. John to provide excellent results,” said Master Sgt. Esteban Garcia, who supervises John. “He is very reliable and has initiative.”

As far as John’s motivations, it’s simple: honor his grandfather and ancestors by being the best Marine he can be.

“I’m really proud of the legacy that my ancestors set for me and I just hope that I can amount to a fraction of what they were,” John said.

For now he sits at his desk, answering questions for an interview, typing away at an email, his phone is ringing, and an officer is walking towards him with a concerned look on his face. Some might get frustrated or muddle through the demanding scene, but to John, it’s just another day at the office. He remains calm, answers the phone and addresses the officer, who tells him that the general’s computer needs urgent fixing. Off he runs to assess the situation.

John, who plans on serving at least 20 years in the Marines, is calculating his next move to become a Marine Corps Special Operations Command critical skills operator or a Marine security guard assigned to protect embassies around the globe.

It wouldn’t be hard for a Marine like John to do so. His physical fitness is top-notch and he has earned a reputation which is all his own.

John says his current repute is because he finds something positive everyday and puts his best foot forward even when the situation is not ideal.

Those who know him say that he is just being John, paying his respects to his grandfather and the proud historical legacy of the Navajo code talkers.