The Organization for Prostitution Survivors, a new Seattle nonprofit, is working to raise money and build public support for a permanent memorial to the victims of Green River killer Gary L. Ridgway. The effort has the support of U.S. Congressman and former King County Sheriff Dave Reichert. 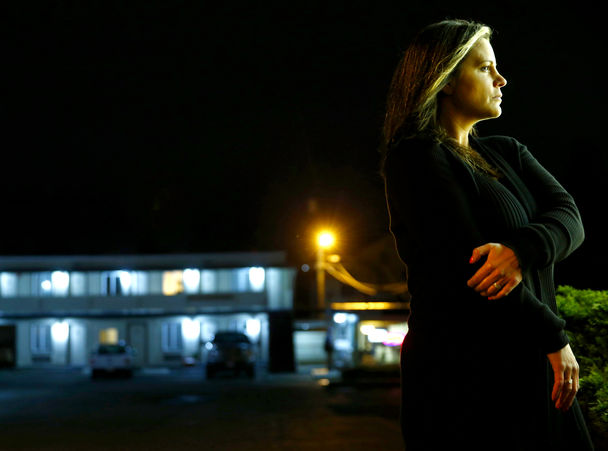 PHOTOS BY ERIKA SCHULTZ / The Seattle Times
Noel Gomez, a former prostitute who co-founded the Organization for Prostitution Survivors, is raising money for a memorial to the victims of Green River killer Gary L. Ridgway, who has pleaded guilty to 49 murders. “I feel like they are my sisters,” Gomez said.

By the time a pimp put Noel Gomez to work on the streets of Seattle in the early 1990s, the Green River killer had slowed his killing spree of girls and women, many who were also caught up in the dark underworld of prostitution.

“But he was still out there and whenever I worked Pacific Highway or Aurora Avenue, I was very aware that the next car I got into could be the Green River killer’s,” said Gomez, 39, who has been out of the life for seven years now. “I was obsessed with him getting caught.”

She recalls watching “Judge Judy” on TV in her Queen Anne apartment in November 2001 when the program was interrupted by a breaking-news alert: Gary L. Ridgway, a then-52-year-old truck painter from Auburn, had been arrested. Gomez cried at the news.

Now, nearly a dozen years later, long after Ridgway pleaded guilty to 49 murders, Gomez and Peter Qualliotine are working to raise money and build public support for a permanent memorial to the girls and women Ridgway strangled and discarded.

The two are co-founders of a new Seattle nonprofit, The Organization for Prostitution Survivors (OPS). They are hosting a series of community engagements at libraries and community centers throughout the year to help educate the public about the dynamics of prostitution and the extreme sexual violence that prostituted girls and women endure.

In addition to the community engagements, Gomez and Qualliotine are holding weekly art workshops for prostitution survivors and plan to display their works in quarterly art exhibits. The women’s artwork, they said, will influence and inform the design of the memorial.

OPS has so far raised about $10,000 of its $225,000 goal. The money will be used to launch the fledgling organization, pay for supplies and salaries (Gomez and Qualliotine have been working for free), provide housing, job skills and other services to survivors of prostitution and go toward funding the design and siting of the memorial.

“In my world, in the world I roam in … it has not gone away,” Gomez said of the trauma caused by the Green River killings. “I think there’s a lot of people who don’t think about it or even know about it. But what people don’t understand is that in certain circles, it’s still a huge freaking wound.”

Gomez, a chemical-dependency professional who works with juveniles in the King County Juvenile Detention Center, previously worked for The Bridge Program, a Seattle residential-recovery center for prostituted youth.

Qualliotine, who also worked for The Bridge, designed one of the country’s first “john schools” in Portland for men who have been arrested for patronizing prostitutes. The schools examine men’s accountability in creating demand for prostitution.

Reichert said he thought about a memorial for the victims years ago, but worried the grief was still too raw for families who had to relive horrible memories every time a new victim was found.

There has been no closure for the families whose daughters’ lives were violently cut short, he said. And for law-enforcement officers, there are aspects of the killings that they’ll never forget.

“When you collect remains for years and years and years, and sometimes multiple bodies in a week, those thoughts and visions never go away,” Reichert said. “ … This is about the victims, the families and the relatives — they’re the ones who have lost loved ones — but this has meaning for the detectives, too.”

The Green River killings were “the worst serial murder case in the nation,” with 51 confirmed victims and dozens of other slayings believed to have been committed by Ridgway, he said. More than half of Ridgway’s victims were 18 or younger.

But Ridgway, who preyed on prostitutes and runaways, “doesn’t have the name recognition Ted Bundy has,” Reichert said, referring to the Northwest serial killer who raped and killed female college students in the 1970s. He believes that’s because of the social stigma attached to those involved in prostitution.

“People were driving to and from work on Pacific Highway or Aurora Avenue or First Avenue and they were never seeing these young girls on the street,” he said. “There were hundreds of them — you couldn’t miss them — but no one saw them.

“Then they disappeared and no one missed them,” Reichert said.

Maybe Seattle and the county can embrace the idea of a memorial to the victims “as the community’s recognition that they failed these kids and for the future, maybe we will remember our failure,” he said.

Reichert, who as a teen ran away from home to escape his abusive, alcoholic father, said 90 percent of Ridgway’s victims were on the streets because of the abuse they suffered in their own homes.

“There’s a reason those girls were on the streets,” he said. “And it’s still happening.”

It was true for Gomez, whose physically abusive, alcoholic father kicked her out when she became pregnant at 15.

And it was true for Debbie Estes, one of Ridgway’s youngest victims, who along with her two siblings was sexually abused for years by a relative, said Estes’ sister, Virginia “Jenny” Graham, of Spokane. After Estes ran away from home, it didn’t take long before she fell under the control of a pimp, Graham said.

The last time Graham saw her sister, Estes and her best friend Becky Marrero — another Ridgway victim — had stopped by the family’s Federal Way home to pick up some of Estes’ things.

Soon after, Estes was raped and pistol-whipped by a serial rapist. She was set to testify against him when she disappeared on Sept. 20, 1982.

Marrero was 20 when she disappeared from a SeaTac motel on Dec. 3, 1982. Her body was discovered in an Auburn ravine December 2010, years after Ridgway had admitted he killed her.

“When these particular girls were being killed, it was like no one cared,” said Graham, a married mother of three. “You couldn’t go anywhere without people talking about it, at the grocery store or wherever. I heard some of the cruelest things being said, like: ‘It’s her fault for being out there.’

“But what people didn’t realize was my sister didn’t have a choice. She couldn’t go home,” Graham said.

Graham and Reichert are working together to contact other victims’ families and hope to meet with them to discuss the memorial.

“It’s for healing, it’s positive and it will happen, I have little doubt,” she said.

For more information on The Organization for Prostitution Survivors and to donate to the Green River Victims Memorial, visit www.seattleops.com. The website includes a video about the effort.

The next OPS community engagement will be held the second week of April, and the first art exhibit is planned for early May. Dates and venues haven’t been confirmed yet, but information will be available on the OPS website.

The Organization for Prostitution Survivors