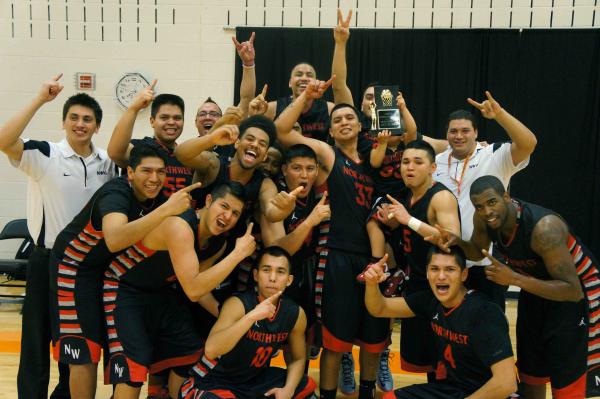 To say the Northwest Indian College (NWIC) men’s basketball team challenged itself this year is to put it mildly. The Eagles’ season was filled with games against much larger schools, including an NCAA Division I and Division II teams.

The Eagles, who represent the only tribal college in Washington and Idaho, took on those large competitors with the hope that the games would prepare them for the tribal college basketball competition of the year: the American Indian Higher Education Consortium (AIHEC) national basketball tournament.

On March 17, the Eagles’ tough season paid off when – for the second consecutive year – the team claimed the AIHEC championship title at the basketball tournament, held in Cloquet, Minnesota.

In their first tournament game, on March 14, the Eagles played fast-paced against Oglala Lakota College (OLC), winning 73-67. They won the other two games in their pool as well, beating Navajo Technical College 61-40 and tournament host Fond Du Lac Tribal and Community College 61-57.

“We had some tough, hard-fought wins during pool play that really helped our team,” NWIC Assistant Coach Adam Lane said in a press release. “That helped us to realize that all of our games would only get tougher as we got into the tournament.”

On March 16, the Eagles played Fort Berthold Community College in the tournament quarterfinals and won 98-78. That win sent them into a semifinals match-up against Salish Kootenai College (SKC), who the Eagles played in AIHEC championship games the past three years. SKC took the titles in 2010 and 2011, but were defeated by the Eagles in 2012.

In the tournament this year, the rivals played hard against each other. “I think our guys played their best during the semifinal game against Salish Kootenai College,” Lane said. “They really came together as a team and played well.”

For their final game, the Eagles were matched up with OLC, their first opponents in pool play. “The championship game was a battle from the start,” Lane said. “We had played Oglala Lakota College once and knew that it would be a hard-fought, physical game.”

Lane said OLC was the Eagles’ toughest opponent, with scores in both games against the team remaining close up until the end. At the end of the championship game, the score was dead even, sending the game into overtime. The Eagles defeated OLC in overtime 111-107. Lane attributed the win to hard work and teamwork, and said that having a large number of players return from last year’s championship team gave the Eagles an edge.

“We knew that if we played as well as we are capable, we would be right there at the end with a chance to win,” he said.

The Eagles’ Doug Williams was named tournament MVP. “Doug was our leading scorer or one of our top scorers in every game we played over there,” Lane said. “He played well on the defensive end as well. He was one of our leading rebounders and also led our team in blocked shots.”

“Both of them played very hard, especially defensively,” Lane said. “Matt Eriacho also had a very strong tournament, playing a great game in the championship to help us win.”

Lane said all of the players deserve recognition for all of their dedication this season.

“They all worked very hard throughout the year and each of them contributed to this championship,” he said.

“It took the entire team working hard every day to bring home another championship,” Mahle said in the release. “Each and every guy deserves recognition for the commitment they made to each other and becoming a stronger team as the year progressed.”

Mahle thanked NWIC and the Lummi Nation for the team’s big welcome home on March 18, when the players were greeted with a celebratory parade in their honor. He also thanked NWIC President Justin Guillory for supporting the team by making the trip to Minnesota for the games.