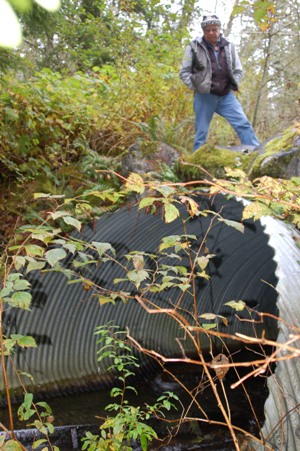 “This is a historic day,” said Billy Frank Jr., Nisqually tribal member and chairman of the Northwest Indian Fisheries Commission. “This ruling isn’t only good for the resource, but for all of us who live here. It will result in more salmon for everyone. This is a great victory for all who have worked so hard to recover wild salmon.”

Martinez issued a permanent injunction requiring the state to repair more than 600 state-owned fish-blocking culverts over the next 17 years to “ensure that the State will act expeditiously in correcting the barrier culverts which violate treaty promises.” Treaty Indian tribes filed the initial culvert case litigation in 2001. The tribes, the United States and the state spent several years trying to settle the case, but were unable to reach agreement.

Tribes reserved the right to harvest salmon in treaties with the United States government more than 150 years ago. That right was upheld in U.S. v. Washington, the 1974 ruling that recognized the tribal right to half of the harvestable salmon returning to state waters and established the tribes as co-managers of the resource with the state.

The injunction was necessary, Martinez ruled, because the state has reduced repair efforts in the past three years, resulting in a net increase of fish blocking culverts. At the current rate, repairs would never be completed, he ruled, because more culverts were becoming barriers to salmon than were being fixed.

“The salmon needs our help now,” Frank said. “Salmon habitat throughout the region continues to be damaged and destroyed faster than we can repair it, and the trend is not improving. This ruling is a step in the right direction.”

Blocking culverts deny salmon access to hundreds of miles of good habitat in western Washington streams, affecting the fish in all stages of their life cycle. State agencies told the Legislature in 1995 that fixing culverts was one of the most cost-effective strategies for restoring salmon habitat and increasing natural salmon production. In 1997 state agencies estimated that every dollar spent fixing culverts would generate four dollars worth of additional salmon production. Recent studies support the state’s findings.

In the ruling Martinez wrote that the state’s duty to fix the culverts does not arise from a “broad environmental servitude” by the state to the treaty tribes, but rather a “narrow and specific treaty-based duty that attaches when the state elects to block rather than bridge a salmon-bearing stream. . .”

“Judge Martinez’s ruling was clear,” Frank said. “Our treaty-reserved right to harvest salmon also includes the right to have those salmon protected so that they are available for harvest, not only by the tribes, but by everyone who lives here.”

Cost estimates provided by the state are higher than the actual repair costs shown in court, Martinez held. He noted that repairs would be funded through the state’s separate transportation budget and would not come at the expense of education or other social services. Costs will be spread out over a 17-year correction program. As highway projects go, the corrections are mostly small.

“The cost will be a small sliver of the State’s two-year $7 billion transportation budget,” Frank said.

The March 29 ruling follows an August 2007 summary judgment issued by Martinez in favor of the tribes, but did not include a remedy to fix the culverts. He encouraged the tribes and state to continue to try and resolve the issue outside of court, but those efforts were unsuccessful.

“We prefer to collaborate with the state to restore and protect salmon and their habitat,” Frank said. “However, the state’s unwillingness to work together and solve the problems of these salmon-blocking culverts in a timely manner left us with no alternative except the courts.”