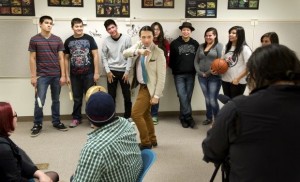 Dallas Goldtooth threatens them: “Someone start talking or I’m going to start calling on you.”

Goldtooth asks again: What do you want to say in your video about alcoholism?

A boy in a black Nike sweatshirt clears his throat.

“It tears families apart,” he says. “Some people forget their heritage when they drink.”

And so begins another video from the 1491s.

The guerrilla Native filmmakers and comedy troupe came to Lincoln on Tuesday to help participants of the Sovereign Native Youth Leadership program shoot a video. The Nebraska Commission on Indian Affairs hosted the 1491s’ visit and sponsors the youth program — high school students from Nebraska’s four tribes learning to be leaders.

Last week, to prepare for the 1491s’ visit, the students brainstormed ideas. But on Tuesday, the five members of the 1491s struggle to get students to share them.

Goldtooth, one of the group’s founders, tells students the filmmakers are there to help them find their voice.

“You dictate the direction,” he says.

Ryan Red Corn, an Osage member of the 1491s, shares the story of a young woman they met at a Native boarding school who told them about briefly escaping the school to retrieve berries from a nearby tree. The 1491s made a video about it.

The 1491s have lampooned everything from the movie “The Last of the Mohicans” to powwow emcees, and they’ve gotten hundreds of thousands of hits on YouTube.

Despite their popularity, at least two Native students haven’t seen their work.

As the morning wears on, the students begin opening up, a little at a time.

Two brothers from Winnebago speak about their dad, who once struggled with alcoholism but quit after his children were born. They talk about losing their uncle to cirrhosis, a liver disease prevalent in alcoholics.

“Top that,” student Skyler Walker says, daring the others to beat his story and eliciting laughter.

So how does a mixed bag of comedians and filmmakers get shy Native students to open up? Red Corn says it’s important to make them laugh and see themselves as important.

The 1491s spend much of Tuesday making each other laugh, poking fun at Red Corn for being half white and Goldtooth for enjoying food too much.

Eventually, they begin teasing the students, including Skyler and his brother Max, who are half Ho-Chunk and half white. The boys call themselves “half chunks.”

Then they turn on each other: “Osage sounds like a drunk person speaking Dakota,” Goldtooth says to Red Corn.

But then, just a little, the tone of their conversation shifts.

As he talks about his love of gourd dancing in the Omaha tribal tradition, student Marco Ramos cuts short a conversation between Red Corn and comedian Bobby Wilson.

“Quit holding hands and pay attention,” he says, as the room erupts in applause and laughter.

Later at lunch, Scott Shafer of the Nebraska Commission on Indian Affairs describes how difficult it has been getting the students to open up to the presenters they have heard since the program began its second year this past fall. So often, students have struggled to connect to policymakers and professionals, he says.

That wasn’t the case Tuesday as the students and the 1491s developed ideas for their video on alcoholism.

One student describes adults who tell her not to drink but who then drink themselves.

Somewhere in the room, an idea flickers.

Filmmaker Sterlin Harjo, who has directed several movies and documentaries, offers an idea that involves the students making the video’s viewers believe they were talking about using drugs and alcohol.

“It helps me forget my worries,” Cheyenne Gottula, an Oglala who attends Lincoln High School, says before the camera. “My mom’s the one who got me into it.”