By Terry Richard, The Oregonian

Six life-size wood figures shouldering a 300-year-old canoe command the most attention among  the exhibits at the new Suquamish Museum and Cultural Center on the west shore of Puget Sound.

Carved from cedar, the figures morph from a pair of sea otters in the rear to tribal ancestors in the middle and to modern people up front. The sculpture symbolizes the carrying of the tribe’s canoe culture forward through time.

The second new tribal museum in Washington to open in two years, the $7.5 million Suquamish Museum is on the Port Madison Indian Reservation near Poulsbo on the Kitsap Peninsula. Its opening last September followed the 2011 opening of the Tulalip Tribe’s Hibulb Cultural Center near Marysville.

The Northwest tribal museums, which include showcase displays in Oregon near Pendleton and at Warm Springs, offer travelers the chance to connect with the rich native culture that predated exploration and settlement by European Americans.

The Suquamish Museum is a short walk from the gravesite of Chief Sealth, the tribal elder who cooperated with Americans when they settled Puget Sound in the 1850s. Seattle is named for the Suquamish chief.

The museum’s small but impressive exhibits feature woodworking, baskets and beadwork. The 9,000-square-foot building, in the style of a traditional longhouse, has a performance space, museum store, plus an art gallery that features the work of 20 tribal artists, including intricate masks in the coastal Salish style.The surrounding grounds are landscaped with native plants. Nearby houses will be removed when leases expire to further enhance the tribe’s cultural district as a learning center. The tribe’s Suquamish Clearwater Casino Resort is one mile south.

The House of Awakened Culture, an indoor tribal event center, is just north of the museum on the waterfront. Seattle’s highest buildings are in view across the Salish Sea, the name bestowed recently on all the inland waters of Washington and lower British Columbia.

The new museum is three times the size of the tribe’s previous cultural display. 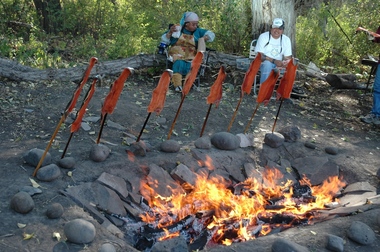 A traditional salmon bake outside the Museum at Warm Springs. Terry Richard/The Oregonian

Other tribal museums in Oregon and Washington Warm Springs: The Museum at Warm Springs features the Wasco, Walla Walla and Paiute tribes of central and eastern Oregon and the Columbia River Gorge. The 25,000-square-foot building opened in 1993. It is located along U.S. 26 in Warm Springs, between Mount Hood and central Oregon, with the relocated Indian Head Casino across the highway; 541-553-3331,  museumatwarmsprings.org.

Umatilla: Tamástslikt Cultural Institute tells the story of the Cayuse, Umatilla and Walla Walla tribes of northeast Oregon and southeast Washington in a 45,000-square-foot building that opened in 1998. It also has an outdoor living-history exhibit during summer. The museum is near Wildhorse Resort and Casino, just east of Pendleton; 541-966-9748,  tcimuseum.com.

Makah: Most artifacts in the Makah Museum at Neah Bay, Wash., come from a nearby archaeological dig on the Olympic Peninsula coast at Ozette. The 24,000-square-foot Makah Cultural and Research Center was built as the repository and display site for the 11-year dig, from 1970 to 1981, which uncovered 55,000 artifacts from a 500-year-old village preserved by a massive mudslide; 360-645-2711, makah.com.

Tulalip: The 23,000-square-foot Hibulb Cultural Center, which opened in 2011, tells the story of the Snohomish, Snoqualmie and Skykomish tribes of the northern Puget Sound area. Its location is Tulalip, Wash., not far off Interstate 5; 360-716-2600, hibulbculturalcenter.org.

Yakama: The Yakama Nation Museum opened in 1980 with a 12,000-square-foot exhibit hall that tells the story of central Washington tribes, as well as famous chiefs from other tribes. The museum is along U.S. 97 at Toppenish, Wash.; 509-865-2800,  yakamamuseum.com.