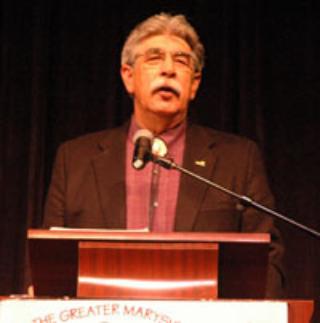 Kirk Boxleitner
Tulalip Tribal Chair Mel Sheldon Jr. speculated that the economy might be on its way back during this year’s State of the Tribes address to the Greater Marysville Tulalip Chamber of Commerce on April 26.

TULALIP — Tulalip Tribal Chair Mel Sheldon Jr. expressed optimism for the future, both in the short term and the long run, as he delivered this year’s State of the Tribes address to the Greater Marysville Tulalip Chamber of Commerce on April 26.

“This was one of the strongest economic regions of the pre-Columbian era, and it can be so once again,” said Sheldon, citing the Native American tribes’ commerce in this area, even well before white settlers had ever arrived. “We offer gaming, retail and entertainment to visitors.”

Sheldon summed up the results of the recent Tulalip Tribal Board of Directors election by noting that he, Vice Chair Deborah Parker, Treasurer Chuck James and Board members Glen Gobin and Marlin Fryberg Jr. had all been reelected, while Marie Zackuse was elected back onto the Board as secretary, and Theresa Sheldon was elected to her first term on the Board.

“Deborah Parker has really led the charge on the Violence Against Women Act,” Sheldon said. “It’s a monumental achievement on behalf of Indian Country and all women.”

Sheldon also praised Ken Kettler, president and chief operating officer of the Tulalip Resort Hotel and Casino, for the roles that he and his staff have played in the Tulalip Resort’s host of awards over the past year, including being named “Best Casino of the Year” by KING-5.

“This place is a destination,” said Sheldon, who cited the number of organizations that take advantage of the hotel’s conference rooms. “We’re 100 percent occupied during the weekend and 80 percent occupied during the week. You can build something like the Taj Mahal casino, that people will visit once and then never again, or you can do what we did.”

While the Tulalip Resort is set to add Asian fusion cuisine and sports bar restaurants this summer, the Quil Ceda Creek Casino is due for $15 million worth of remodeling.

“There’s been rumors for a while that we might be adding a new hotel wing, and the truth is that we’re always having conversations about it,” Sheldon said. “If we’re at 80 percent of our total occupancy during the week, we could probably stand to expand.”

Although Sheldon praised the Tulalip Amphitheatre as an intimate outdoor venue for entertainment and various community events, he acknowledged that the Board has asked itself whether there should be a larger capacity events center as well. And with the Tribes meeting their budget projections, Sheldon speculated that the economy might be on its way back.

“Tulalip dollars stretch a long way,” Sheldon said. “Seventy percent of our work force lives off the reservation. We pay out $120 million in annual wages, and most of that money stays in the local economy. Last year, Quil Ceda Village paid $40 million in state sales tax.”

Sheldon touted the past year’s openings of Cabela’s and the Olive Garden, and anticipated the impending completion of 90,000 additional square feet to the Seattle Premium Outlets. At the same time, Sheldon was quick to share credit for the Tribes’ successes with its partners in the cities of Marysville and Everett, Snohomish County and beyond.

“Marysville’s got a great mayor whose work will benefit this community even long after he’s gone,” said Sheldon, who mentioned Marysville Mayor Jon Nehring’s lobbying against the traffic impacts of increased coal trains as but one example, before he directed his comments to outgoing Marysville School District Superintendent Dr. Larry Nyland. “From our hearts, we thank you. We’ve always trusted you. We’re blessed with great leaders all around. If we want a strong economy, we need to keep working together.”