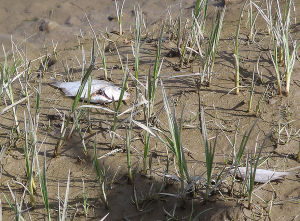 Dead shiner perch lay in the mud after hundreds of the fish died on April 26 in Browns Slough. Just the day before, Skagit River System Cooperative counted 416 Chinook fingerlings in this same area.

The Skagit Valley Herald reports on a fish die-off in Browns Slough. Last week, hundreds of shiner perch and some fingerling chinook were found dead near Fir Island Road:

Other than the dead fish, nothing appeared out of the ordinary. Because there was no obvious cause of the fish deaths, Wildlife called in Ecology, which arrived about an hour later.

But Ecology workers saw no sheen on the water that might indicate a chemical spill and didn’t note any chemical smell. And though many suspected agricultural overspray, they were unlikely to identify a responsible party.

Ecology spokesman Larry Altose said workers took fish and water samples, but by that time the water already had drained from the slough into Skagit Bay. Without a responsible party, Ecology would not test the samples, he said.

Altose said there have been no fish kills reported in that area in the week since then. He said it could be “an isolated fish kill incident that could be related to anything.”

“It’s possible the fish kill will be unsolved,” Altose said. “It won’t be the first time, and it won’t be the only time that this happens.”

In departmental emails on April 26, Ecology workers seemed dismissive of the fish kill.

“The WDFW people there don’t seem to have much interest so I’m not sure why we should,” wrote Dale Davis with Ecology’s spills program.

Brian Williams, a habitat biologist out of Wildlife’s La Conner office, said, “We are in fact very interested and concerned. … However, without a clearer understanding of what triggered the fish kill, it is premature to engage enforcement staff.”

But Ecology said nothing could be done unless a cause was obvious.

“Ecology is the correct contact for a water contamination issue, but like you, we are not able to do much without a (responsible party),” Davis wrote.

Davis was clear: If there’s no responsible party, Ecology will not test the samples.

“So fill me in on why we would ever call you again if you can’t be bothered to establish a cause,” wrote La Conner District biologist Brett Barkdull. “We would have called enforcement if we had cause, we can’t arrest someone without cause. You basically wasted our time.”

Altose said that testing is only done if Ecology knows the culprit.

“Testing is usually done as a confirmational exercise, but not for the purpose of fishing (for a cause),” Altose said in a phone conversation. “There could be any number of things that could be out there.”

“We have to make judgment calls in what we can attend to and cannot attend to,” Altose said.

Estuaries like Browns Slough are critical salmon-rearing habitat, said Eric Beamer, director of research for the Skagit River System Cooperative. The Cooperative has studied that exact spot on Browns Slough for the past 18 years.

Every two weeks or so, a crew from the Cooperative traps the fish in a fine-mesh net. As the tide recedes and flows out of the nearby tide gate, the fish are harmlessly captured, counted and released.

On Thursday, April 25 — the day before the fish kill — the Cooperative noted 416 Chinook fingerlings in its trap. Beamer called it a “good, solid catch” during a peak time of year.

There also were several hundred chum salmon, a handful of coho smolts and several other species. The group also monitors dissolved oxygen, food sources and water temperature — all of which were fine that day.

“Places like Browns Slough are full of these chinook salmon,” Beamer said. “The Skagit has millions of juvenile chinook coming down, passing Mount Vernon and colonizing the estuaries.”

The estuaries, like Browns Slough, are critical for the salmonids’ survival. In the weeks and months they are present, Beamer said they can double their length and increase weight tenfold.

“It’s a critical part of what they need to survive in the ocean,” Beamer said.

Anyone who witnesses a fish kill, pollution discharge or knows the cause of the die-off in Browns Slough in April should call the state Department of Emergency Management: 1-800-258-5990.