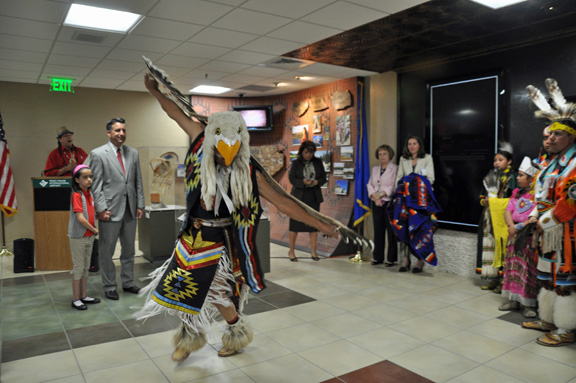 A new exhibit showcasing Nevada’s American Indians at Reno-Tahoe International Airport will be seen by the approximately 3.8 million travelers passing through the facility.

The display, on the airport’s second floor and accessible to the public, was unveiled at a ceremony May 3.

It consists of a wall of photographs on a background resembling a traditional American Indian basket, a tule duck decoy created by Mike Williams of the Fallon Paiute Shoshone Tribe, a cradleboard created by Bernita Tetin from the Pyramid Lake Paiute Tribe and a flat screen projecting videos about Nevada’s Indian culture. For a look at one of the videos, developed by Nevada Indian Territory, a nonprofit organization that promotes tribal tourism in Nevada, click here.

Sandoval added that he had talked to Krys Bart, president and CEO of the Reno Tahoe Airport Authority, and Sherry Rupert, executive director of the Nevada Indian Commission, about developing an Nevada Indian exhibit after seeing American Indian displays in other airports. An earlier, temporary Nevada Indian exhibit was on display at the airport from November 2011 to January 2012. The current exhibit will be permanent.