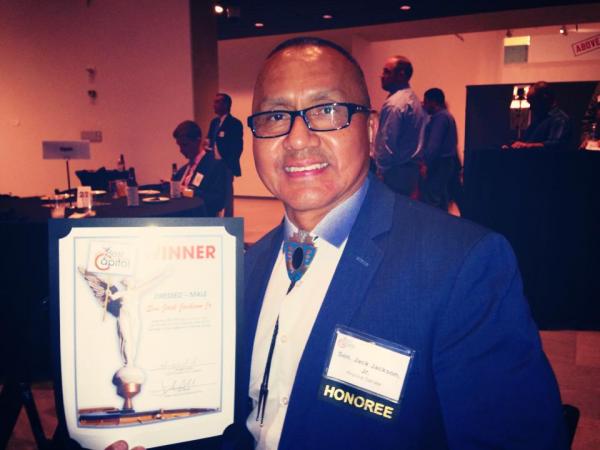 Courtesy Jack Jackson’s Office
Arizona State Senator Jack Jackson, Jr.: “With the ruling yesterday, it’s just a matter of time before Arizona and the other states allow it.”

Arizona State Senator Jack Jackson, Jr. says both the Supreme Court’s DOMA ruling and its effective Proposition 8 block this week have a “special effect” on he and his husband, David Bailey. (Related story: Supreme Court Removes Hurdles to Same-Sex Marriage)

But we still have a ways to go before marriage equality is real.

Jackson and Bailey were married in California in the fall of 2008, a month before voters enacted Prop 8, making gay marriage illegal in that state.

But they live in Arizona, and Jackson points out that the DOMA ruling only applies in the 13 states that allow gay marriage. Arizona isn’t one of them. So he and his husband remain ineligible for the same federal benefits – including tax-filing status – that are available to other married couples.

“Arizona has in our constitution that marriage is only between a man and a woman,” he said. “For folks like us who are married in another state, the next step would be to see how you challenge that.”

Jackson did introduce legislation early this year that would have changed the marriage provision of the constitution, but it languished in a conservative state legislature.

“I understand there’s another effort happening here in Arizona to get it back on the ballot in 2014,” he said on Thursday. “With the ruling yesterday, it’s just a matter of time before Arizona and the other states allow it.”

The Supreme Court’s decision came in the case of United States v. Windsor. In 2009, Edith Windsor was denied access to the spousal exemption of the federal estate tax because her spouse was a woman, resulting in her having to pay $363,053. Windsor challenged Section 3 of the Defense of Marriage Act (DOMA), a Clinton-era law defining “marriage” and “spouse” as being between members of “opposite sex.” On Wednesday, the Supreme Court held that limiting the definition to between a man and woman, “interfere[s] with the equal dignity of same sex marriages.”

In addition to 13 states so far, gay marriage is legal in the Coquille Tribe (Oregon) since 2008, the Suquamish tribe (Washington) since 2011 and the Little Traverse Bay Bands of Odawa Indians (Michigan), Pokagon Band of Potawatomi Indians (Michigan), and Santa Ysabel Tribe (California) since 2013. (Related story: Two-Spirit Community Applauds DOMA Strikedown and Dismissal of Prop 8)

Jackson’s tribe, the Navajo Nation, has a legal provision defining marriage as between a man and a woman. But as acceptance increases, “I think the tribal governments will also honor the will of the people,” he said. “There was actually an LGBT [Lesbian, Gay, Transgender, Bisexual] conference on Navajo [Nation] a couple months ago. People were talking about how do we overturn what is on the law books for the Navajo Nation. There is a movement, not only here in Arizona but on tribal nations.”