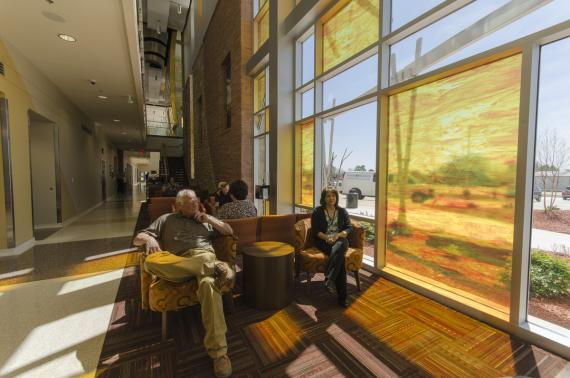 In the early 1990s, James Childers attended the groundbreaking of the Redbird Smith Health Clinic in Sallisaw, Okla., five miles north of the little town where he lived. Redbird Smith was the first clinic built from the ground up by the Cherokee Nation and—Childers was surprised to see—it was a huge improvement over the typical Indian clinics he was used to.

As an architect, Childers had been doing healthcare projects primarily with the Sisters of Mercy system since 1980. He’d never pursued any government- or publically funded healthcare projects—but the Redbird Smith project got him thinking.

“The architect for that clinic was out of New Mexico,” Childers says. “And that’s what caught my attention. I thought, there’s no need for them to be going to Albuquerque to do clinics in Oklahoma.”

The building, staffing, and maintenance of healthcare facilities for federally recognized Native American tribes have fallen under the jurisdiction of Indian Health Service (IHS) since that department was established in 1955. Traditionally, these IHS clinics haven’t exactly been design-driven, nor have they been particularly reflective of the cultures they serve. Built to meet strict federal guidelines that could be easily replicated from site to site, most of these clinics “were just boxes,” Childers says. “They’re just very functional government buildings.”

Over the past two decades, however, tribes have begun investing more and more money earned through their businesses in improving healthcare for its members. Fueled by joint ventures between the tribes and IHS, healthcare facilities are getting the attention they deserve, with bigger footprints (to better serve the number of patients and house more varied services); thoughtful innovations based on wellness research; and culturally significant touches to celebrate the rich histories of the tribes and provide a positive community resource.

Since 1992, Childers (a member of the Cherokee Nation himself) has been a prolific contributor to these new facilities. Of the 19 joint venture projects between IHS and tribes across the country, Childers has designed seven of them—all publicly bid and awarded separately by each tribe.

Healthcare Design spoke with Childers about the legacy he’s building, as well as the process behind designing facilities that proudly demonstrate the tribal values and cultural wealth of a historically underserved population.

Healthcare Design: Your first tribal project was the Wilma P. Mankiller Clinic in Stilwell, Okla., in 1992. How did you approach that job?
James Childers:  That was an Indian Health Service facility. And as we went through the IHS program, we figured out that what it produced was the typical Indian clinic you might walk into anywhere: too small, overcrowded, no waiting room, no people amenities. Indian Health Service did a fantastic job of getting the most out of its square footage, but there were really no provisions for waiting areas.

We’re in a very rural area here in Oklahoma; these people might drive 40-50 miles for healthcare. And when they did, they brought Grandpa and Grandma and the kids. Everybody came. As a result, you’d go into these clinics and the corridors would just be lined with people.

The IHS design guidelines dictated that you be within 10 percent of their square footage limitations. So what we ended up doing was reducing the square footage in the mechanical rooms. By selecting the right kind of systems and putting a lot of this equipment on the roof instead of on the floor, I ended up under their program on total square footage.

So what they allowed me to do—after many meetings and discussions—was to take that additional square footage and put it into circulation. We increased the widths of corridors and increased the size of waiting rooms. This was all an effort to get Indian healthcare environments compatible with private care.