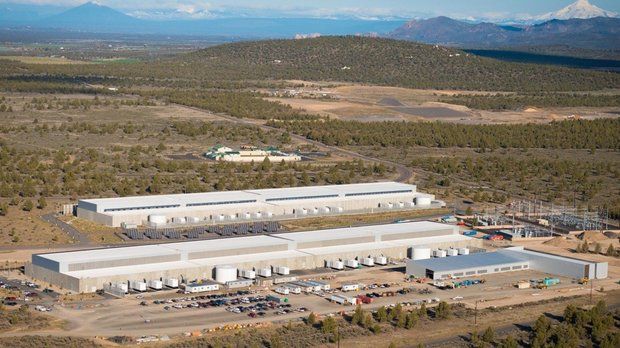 Facebook’s data center in Prineville. The main data halls are in the center of the picture. The cold storage facility is the L-shaped building on the lower right. (Facebook photo)

Altogether, Facebook now hosts more than 250 billion photos — and it’s seeking new technologies to store those old pictures efficiently and reliably at its data centers in Prineville and elsewhere around the world.

“These are the precious memories of people around the world,” said Jay Parikh, Facebook’s vice president of infrastructure. “We can’t lose them.”

Parikh was in Portland today to deliver a keynote address at OSCON, the annual O’Reilly Open Source Convention at the Oregon Convention Center. He spoke about the company’s “Open Compute Project,” an effort to build collaboration among data center operators to improve performance and efficiency.

Facebook says 82 percent of its traffic is focused on just 8 percent of its photos, generally the most recent posts. It plans to put older images into “cold storage,” data centers that host older photos in more efficient — albeit a bit less speedy — facilities.

If Facebook can store photos more efficiently, it can substantially cut its energy use, operating costs and environmental impact.

The O’Reilly Open Source Convention will return to Portland in 2014 and again in 2015.

The state’s largest annual tech conference attracts more than 3,000 people to the Oregon Convention Center each year. It first came to Portland in 2003, then moved to San Jose in 2009. The following year, Portland signed a four-year deal to bring OSCON back.

That deal expires this year, but OSCON says it plans to return next year and in 2015. Next year’s conference will run July 20-24.

On Wednesday, Parikh offered more detail about Facebook’s vision for the future. Construction on its Prineville cold storage facility is due to wrap up this fall, he said in a conversation following his OSCON keynote. Substantial testing will follow, he said, before it begins hosting older photos.

Most of those servers will be idle most of the time. Facebook will keep just a small number of hard drives running, and spin up additional ones when it needs to retrieve the photos they store from cold storage.

Waking up those hard drives is a slow, energy-intensive process. Parikh said Facebook hopes a new technology will emerge that’s both faster and more efficient. He calls it “cold flash.”

It’s the same flash memory technology that stores the songs on your smartphone, and the documents you carry around on a thumb drive.

Cold flash, Parikh said, would be a low-grade, high-capacity storage technology. It wouldn’t need the durability that flash memory in a thin laptop requires — most of the cold storage material stored on it would sit unused forever.

It will likely be a year or two before anyone develops suitable flash memory, Parikh said. And perhaps it’s impossible to do it at a price that would be cost-effective for Facebook.

But through its Open Compute efforts, Parikh said he hopes to demonstrate that Facebook and others would provide an eager customer base for whoever invents cold flash.

All kinds of businesses, he said, need electronic cold storage for old records they may never need — but must retain, just in case.