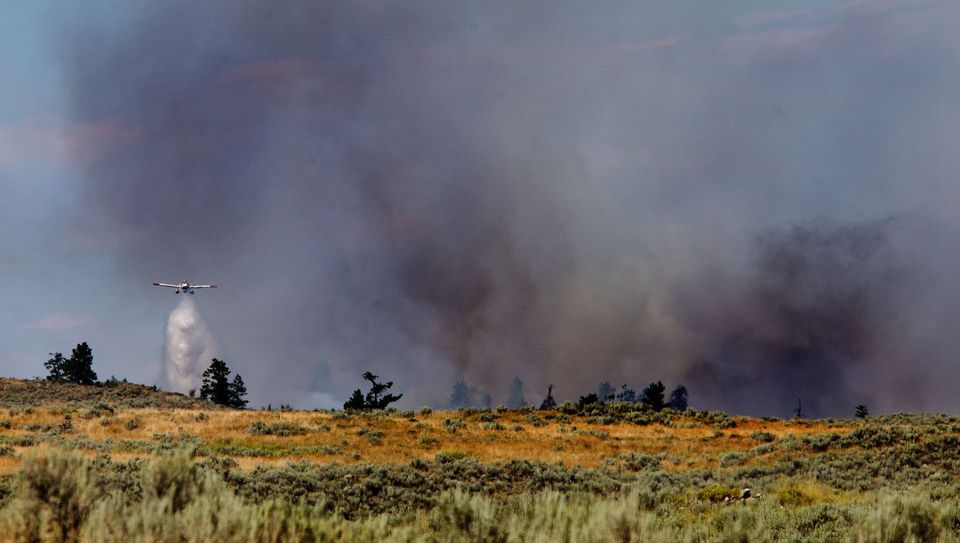 A plane drops water on the edge of a fire near Omak Lake east of Okanogan Tuesday afternoon. World photo/Don Seabrook

OMAK — No lightning storms had passed over the Okanogan Valley since Sunday.

But a 200-acre fire on Tuesday afternoon was ignited by that storm. It’s called a holdover fire, and fire officials on the Colville Indian Reservation are expecting more will show themselves in the next day or two, said Ike Cawston, fire management officer for the Colville Tribes’ Mt. Tolman Fire Center.

Firefighters from the Colville Confederated Tribes, Bureau of Indian Affairs and Fire District 8 responded, along with air support from the state Department of Natural Resources.

With help from the air, firefighters surrounded the grass and sagebrush fire, Cawston said. But that was largely due to the fire’s close proximity to Omak Lake. “Being able to scoop water out of the lake with such a short turn-around really helped,” he added.

Cawston said close to 6,000 lightning strikes hit the reservation, and despite the heavy rain that came with it, fire can smolder for days while light fuels dry out, and then ignite a fire.

“Initially, as it passed over the reservation, our greater concern was three or four days out,” he said.

During Tuesday’s fire, officials were worried about one home in the area, but no structures were lost and no one was injured.