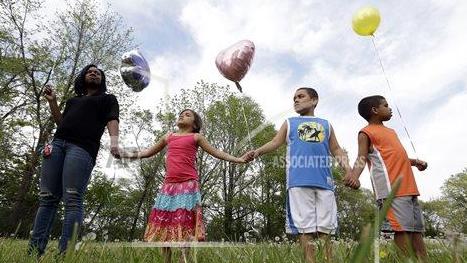 Residents listen to speeches before releasing balloons in support of the three women found in a house on Seymour Avenue in Cleveland, Ohio May 9, 2013. (AP/David Duprey)

The three women held for years by Ariel Castro have used their public stature to highlight the child abduction problem.

In Cleveland, kidnapping survivor Michelle Knight watched Tuesday as the house that served as her prison for a decade was torn down. Surrounded by members of the county prosecutor’s office and a group of Guardian Angels grasping dozens of yellow balloons — each representing a child that was abducted but not recovered — which she released, Knight stated that her visit had a simple purpose: that there is hope.

“Nobody was there for me when I was missing, and I want the people to know, including the mothers, that they can have strength, they can have hope, and their child will come back,” Knight said.

Knight, Gina DeJesus and Amanda Berry were kidnapped and held captive by Ariel Castro at his home at 2207 Seymour Ave. until Berry kicked her way through the front door with the assistance of a bystander and escaped last May. On August 1, Castro was sentenced to life imprisonment without the possibility of parole plus an additional millenium in prison after pleading guilty to the 937 counts he was indicted with, including multiple counts of rape, kidnapping and murder.

Since their release, all three women have used the public attention afforded them to highlight the child abduction problem in this country. “Our work is not done. We gotta keep our eyes and ears open. Don’t let these girls go in vain,” said Felix DeJesus, father of Gina DeJesus, at Cleveland’s Latino Fest parade last weekend.

According to the last comprehensive national study taken on the state of missing children, completed in 1999, there are approximately 800,000 children under the age of 18 reported missing in the United States, with more than 58,000 estimated to have been abducted by non-family members. 115 of these cases are estimated to be a “stereotypical” kidnapping, in which a stranger kidnapped the child, held him/her 50 miles or more away from the abduction site, and killed, ransomed or committed to permanently holding the child.

The remainder fall into categories including sex trafficking, familial abductions, assisted runaways and random assault. The recovery rate of missing or abducted children stands at 97 percent today — a 35 percent increase from 1990. However, for the approximately 24,000 children that have yet to be found, the road home may be hard and even impossible to find.

“It was a regular shopping mall that my parents and I went school shopping at every year, but this guy managed to exchange phone numbers with me,” said Holly Smith, a child sex trafficking survivor, to HuffPost Live in reflection of her own abduction story. Smith was interviewed after the announcement that the FBI has recovered more than 100 victims of child sex trafficking and arrested 150 pimps in a three-day nationwide sweep. Smith was 14 when she was abducted and was held for only 36 hours before being arrested for prostitution. “We talked on the phone for about two weeks, and he sort of tapped into my interests and my concerns and he was able to play off my vulnerabilities.”

“He was able to lure me away from home with things like — he could help me become a model, he could help me become a songwriter because I really wanted to join a rock band. Things that might sound not so real to an adult. They worked well on me at 14. And so he lured me away from home, and within hours of running away, I was forced into prostitution in Atlantic City, N.J.”

Stories such as Smith’s and the case of Jocelyn Rojas — a 5-years-old Lancaster, Penn. girl who was saved from abduction by an attentive 15-years-old boy, Temar Boggs, who noticed a car being driven in a peculiar manner — seem to capture the public’s imagination and draw a prompt response. But what happens when the abduction case does not draw a public response?

Last week, one of the three men held captive by 31-year-old Walter Renard Jones, William Merle Greenawalt, 79, has died of complications due to malnourishment. Jones has been charged with two counts of elderly abuse with serious bodily injury. It has been alleged that Jones held Greenawalt, Dean Cottingham, 59, and John Edward Padget, 64, in his garage so that he could collect on the men’s assistance checks.

In cases such as this, the inadequacies of the way law enforcement handles such situations start to show. While recent efforts, such as the AMBER Alert System, have resulted in a net improvement in recovery rates, abducted adults are considered low-priority. Many police departments will not take a missing person case for an adult prior to 24 hours after the disappearance, and most will not extend full resources to the case, due to the possibility that the missing person wishes to not be found.

While police response rates for abducted children to the child’s home or scene of abduction are modest — an estimated 68 percent, according to the 1999 Second National Incidence Studies of Missing, Abducted, Runaway, and Throwaway Children (NISMART-2) — the response rate for adult disappearances is dramatically less. Recently, Butte County has been profiled in the media for its efforts to create its first master list of missing persons.

“It’s not completely surprising that there was no master list. If someone is missing today, they most likely will still be missing tomorrow. But if a homicide or some other serious crime occurs today, limited investigative resources would be more productively spent on those immediate cases,” reported the Chino Enterprise-Record on the Butte County Sheriff’s Office’s efforts. “That’s how a file on the missing might go missing as well. It’s not that it’s unimportant. It’s just that it’s not as timely.”

In light of dwindling budgets, shifting priorities and an ill-defined division of jurisdictions between the federal government and local authorities in missing persons cases, many cases get overlooked or ignored, and situations such as the Jaycee Dugard abduction — in which Dugard was held captive for more than 18 years by a sex offender who was enrolled as a parolee — and the Ariel Castro case are allowed to proliferate. For those still waiting to be found, more needs to be done.