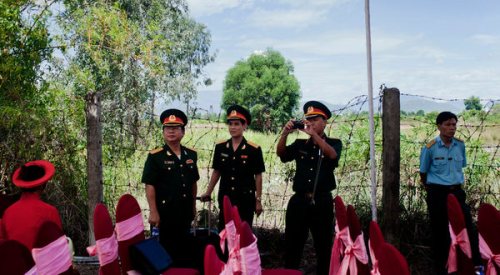 Forty years after the United States stopped spraying herbicides in the jungles of Southeast Asia in the hopes of denying cover to Vietcong fighters and North Vietnamese troops, an air base here is one of about two dozen former American sites that remain polluted with an especially toxic strain of dioxin, the chemical contaminant in Agent Orange that has been linked to cancers, birth defects and other diseases.

On Thursday, after years of rebuffing Vietnamese requests for assistance in a cleanup, the United States inaugurated its first major effort to address the environmental effects of the long war.

“This morning we celebrate a milestone in our bilateral relationship,” David B. Shear, the American ambassador to Vietnam, said at a ceremony attended by senior officers of the Vietnamese military. “We’re cleaning up this mess.”

The program, which is expected to cost $43 million and take four years, was officially welcomed with smiles and handshakes at the ceremony. But bitterness remains here. Agent Orange is mentioned often in the news media, and victims are commemorated annually on Aug. 10, the day in 1961 when American forces first tested spraying it in Vietnam. The government objected to Olympics sponsorship this year by Dow Chemical, a leading producer of Agent Orange during the war. Many here have not hesitated to call the American program too little — it addresses only the one site — and very late.

“It’s a big step,” said Ngo Quang Xuan, a former Vietnamese ambassador to the United Nations. “But in the eyes of those who suffered the consequences, it’s not enough.”

Over a decade of war, the United States sprayed about 20 million gallons of Agent Orange and other herbicides in Vietnam, Cambodia and Laos, halting only after scientists commissioned by the Agriculture Department issued a report expressing concerns that dioxin showed “a significant potential to increase birth defects.” By the time the spraying stopped, Agent Orange and other herbicides had destroyed 2 million hectares, or 5.5 million acres, of forest and cropland, an area roughly the size of New Jersey.

Nguyen Van Rinh, a retired lieutenant general who is now the chairman of the Vietnam Association for Victims of Agent Orange/Dioxin, has vivid memories of hearing American aircraft above the jungles of southern Vietnam and seeing Agent Orange raining down in sheets on him and his troops. Plants and animals exposed to the defoliant were dead within days. Many of his troops later suffered illnesses that he suspects were linked to the repeated exposure to Agent Orange, used in concentrations 20 to 55 times that of normal agricultural use.

“I would like to have one message sent to the American people,” Mr. Rinh said in his office, where a large bust of Ho Chi Minh, the wartime leader and icon, stared down from a shelf behind his desk. “The plight of Agent Orange victims continues. I think the relationship would rise up to new heights if the American government took responsibility and helped their victims and address the consequences.”

Those who have worked on the issue say the American government has been slow to address the issue in part because of concerns about liability. It took years for American soldiers who sprayed the chemicals to secure settlements from the chemical companies that produced them. The United States government, which also lagged in acknowledging the problem, has spent billions of dollars on disability payments and health care for American soldiers who came into contact with Agent Orange.

Mr. Shear, the American ambassador, sidestepped a reporter’s question after the ceremony about whether the United States would take responsibility for the environmental and health effects of Agent Orange.

“There is a disconnect between what America has done for its soldiers and what America has done for Vietnam,” said Charles Bailey, the director of the Agent Orange in Vietnam Program, an effort by the Aspen Institute, a nongovernmental organization based in Washington, to reach common ground between the United States and Vietnam on the issue. “I’m sometimes glad I’m not a U.S. diplomat in trying to square that circle.”

A class-action case against chemical companies filed in the United States on behalf of millions of Vietnamese was dismissed in 2005 on the grounds that supplying the defoliant did not amount to a war crime and that the Vietnamese plaintiffs had not established a clear causal effect between exposure to Agent Orange and their health problems. The United States government is rolling out a modest $11.4 million program to help people with disabilities in Vietnam, but it is not explicitly linked to Agent Orange. The oft-repeated American formulation is “assistance regardless of cause.”

When environmental factors are linked to disease, proof positive is sometimes hard to determine. American military studies have outlined connections between Agent Orange and myriad ailments, while Dow Chemical maintains that the “very substantial body of human evidence on Agent Orange establishes that veterans’ illnesses are not caused by Agent Orange.”

In Vietnam, there are many cases in which links to Agent Orange appear striking.

Nguyen Van Dung, 42, moved to Da Nang in 1996 with his wife and newborn daughter and worked at the former American base, wading through the knee-deep mud of drainage ditches and dredging them with a shovel. During the first 10 years, he, like other employees, harvested fish and eels from the large ponds and canals on the air base grounds, taking them home almost daily. Studies later showed high concentrations of dioxin in the fat tissue and organs of the fish.

The couple’s first daughter is now at the top of her class, but their second child, also a girl, was born in 2000 with a rare blood disease. She died at 7.

Their son Tu was born in 2008, and he was quickly found to have the same blood condition. With regular transfusions, he has defied his doctor’s prediction that he would not live past 3, but he is nearly blind, with bulging eyes that roll wildly, and he speaks in high-pitched tones that only his parents can understand. His chest cavity is so weak that he cannot breathe if he lies on his stomach.

What caused the birth defects, and who is to blame? Detailed medical tests are out of the question for Tu’s parents, whose combined monthly income is the equivalent of $350, much of which goes to medical care.

But Luu Thi Thu, the boy’s mother, does not hesitate to assign blame.

“If there hadn’t been a war and Americans hadn’t sprayed dioxin and chemicals into this area, we wouldn’t be suffering these consequences,” she said.

“What happened to my son is already done, and nothing can change that,” she said. “The American and Vietnamese governments need to clean up the Da Nang airport so that the next generation will not be affected.”

Le Ke Son, a doctor and the most senior Vietnamese official responsible for the government’s programs related to Agent Orange and other chemicals used during the war, said the debates should take a back seat to aid. “We spend a lot of time arguing about the reason why people are disabled,” he said. “One way or another they are victims and suffered from the legacy of the war. We should do something for them.”