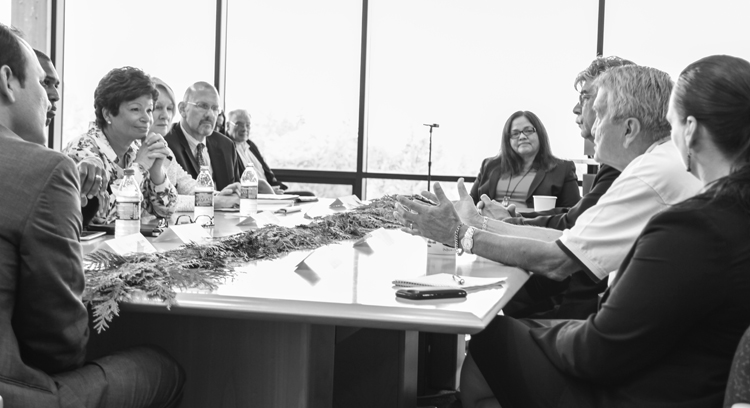 During a visit from White House officials, Valerie Jarrett, Senior Advisor to President Obama, and Chair of the White House Council on Women and Girls, commended Tulalip for all of it’s efforts, both in criminal justice in general and specifically for playing such an impactful role bringing awareness to the plight of Native American women left out by original VAWA.
Photo/Brandi N. Montreuil

TULALIP, Wash., — “It’s not enough to cry peace, we have to act peace and we have to live peace,” Tulalip Tribal Court’s Chief Judge Theresa Pouley opened a September visit from White House officials with her teachings as a citizen of the Colville Confederated Tribes and as a tribal court judge.

She went on to explain that although talking and planning are necessary to ensure justice, walking the talk is crucial.

That collaboration, she clarified, along with a history of providing due process beyond the requirements of the law, are just two of the reasons that Tulalip is ready to take over jurisdiction of all cases involving domestic violence. Until now, tribes have had no jurisdiction over domestic violence when one of the parties involved is not a tribal citizen.

“This is a historic moment,” said Pouley. “I want to marvel in the fact that for the first time, tribal courts are given authority over non-tribal [citizens]. We recognize that tribes are in the best position to do it [enforce the Violence Against Women Act], and we can do it better. We’re waiting to be a pilot. We’re ready to go and we can change the face of this community!”

The Violence Against Women Act (VAWA) was originally passed 19 years ago. The re-authorization of the act was delayed by a fight to include provisions protecting Native American women.

President Obama encapsulated the necessity for those provisions during a speech he made while signing the re-authorization.

“Indian Country has some of the highest rates of domestic abuse in America. And one of the reasons is that when Native American women are abused on tribal lands by an attacker who is not Native American, the attacker is immune from prosecution by tribal courts. Well, as soon as I sign this bill that ends.”

Tulalip’s Interim Chief of Police Carlos Echevarria reiterated the importance of tribes having jurisdiction over all domestic violence cases.

“We see up to 75,000 visitors daily,” he pointed out. “We have 13,000 non-member residents, a lot of traffic and a lot of guests. I can’t tell you how frustrating it’s been arresting non-Indians for domestic crimes against members and knowing that nothing was likely to be done.”

Tulalip Vice-Chairwoman Deborah Parker, who has become known nationally as the face of Native women affected by VAWA, put it in even plainer words.

“We shouldn’t have to walk in fear that we’re going to be raped or abused at any age, from infants to our elders. We get these calls daily. Pretty soon, with your help, this will change.”

Although pleased with this expansion of tribal jurisdiction, Echevarria said it can’t be the last step in recognizing tribes rights to police their lands.

“This is a significant achievement to all tribes and another step in creating a safer community,” he said. “We’ll now move on to the next step, full criminal jurisdiction and a reversal of the Oliphant decision.”

Although no decisions or formal announcements came from the day-long tour, Valerie Jarrett, Senior Advisor to President Obama, and Chair of the White House Council on Women and Girls commended Tulalip for all of it’s efforts, both in criminal justice in general and specifically for playing such an impactful role bringing awareness to the plight of Native American women left out by original VAWA. She made a point of thanking Vice-Chairwoman Parker for being willing to relive her painful past, ‘not just one time, but over and over and over again,’ in order to ensure that Native women are protected in the future.

“It’s an exciting time to be here,” said Jarrett. “As we heard from Chief Justice Pouley, you are ready. Now it’s up to our team to step up to the plate.”