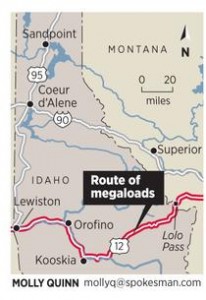 Article III of the Treaty with the Nez Perces of 1855 reserved for Nez Perce Indians the “right of taking fish at all usual and accustomed places” and “the privilege of hunting . . . upon open and unclaimed land.” As the court explained: “Although the Nez Perce ceded the lands now encompassing the Nez Perce Clearwater National Forests to the United States, ‘they did not relinquish rights to hunt, fish, and gather, or to practice traditional religious and cultural ceremonies on these ancestral homelands.’”

Critically, even though Article III of the Nez Perce Treaty does not mention the word “consultation,” the federal court ruled that: The duty of the Forest Service to conduct a consultation after finding that the mega-loads might affect cultural and intrinsic values is commanded by Treaty rights” – “there is no discretion to refuse consultation.” And “[w]hen the duty to consult runs to a Tribe, the federal agency generally must consult with the Tribe before taking the action at issue.” Indeed, “meaningful consultation takes place “typically before undertaking a course of action” (emphasis in original).

The Nez Perce Megaloads decision is at least the second recent decision from the federal courts, affirming Treaty-based consultation requirements over ceded or off-reservation lands, even though the Treaty Articles at issue do not mention the word “consultation.” In 2010, a Washington State federal court enjoined the United States from allowing a private garbage contractor from importing municipal waste from the Hawaiian Islands into the Yakama Nation’s ceded lands and fishing, hunting and gathering areas. That court ruled that there were “serious questions about whether Defendants adequately consulted with the Yakama Nation as required by [Article III] of the Yakama Treaty of 1855,” even though that Treaty Article, too, does not expressly require consultation.

Under international legal norms, “the treaty obligation to consult that is intrinsic in any bilateral agreement between nations.” G. Galanda, “The Federal Indian Consultation Right: No Paper Tiger,” Indian Country Today; see Restatement (Third) Foreign Relations Law of the United States §§ 325, 337 (1986).  When will the United States begin to truly honor this norm?  Indeed, Nez Perce v. Megaloads, like the Yakama Hawaiian garbage case and the Quechan solar power case, illustrate how even the “pro-tribal” Obama Administration will flout federal Indian consultation rights in order to cut red tape for, and otherwise fast-track, pet projects like Tar Sands.

In fact, when the political and economic stakes are high, and the choice must be made between siding with either mega-corporations, or Indians, the United States and its President will always — ALWAYS –– side with almighty corporate interests, and ignore guaranteed Indian rights. That paradigm is nothing new to Indian Country; it has been happening for centuries. What is new is the United States talking out of both sides of its mouth about tribal consultation.

Gabriel “Gabe” Galanda is a partner at Galanda Broadman PLLC, of Seattle, an American Indian owned law firm.  He is an enrolled member of the Round Valley Indian Tribes of Covelo, California.  He can be reached at 206.691.3631 or gabe@galandabroadman.com.