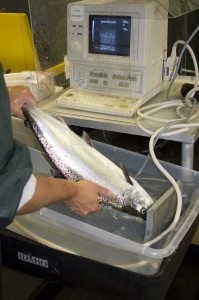 Staff at NOAA’s Manchester Research Station ultrasound a chinook salmon to determine its sex and whether it is ready to be spawned.

More than 500 mature chinook salmon raised in captivity could produce about 1 million eggs at the Lummi Nation’s Skookum Creek Hatchery this year.

Of those, more than 600,000 juveniles are expected to be released into the river next spring.

The fish are part of a captive broodstock program to preserve threatened South Fork Nooksack River chinook. The multi-agency effort involves Lummi, the Nooksack Tribe, the state Department of Fish and Wildlife (WDFW) and the National Oceanic and Atmospheric Administration (NOAA). Its goal is to help the recovery of the South Fork Nooksack chinook, a significant population that must be on a path to recovery before Endangered Species Act restrictions can be lifted.

In 2007, the partners began collecting juvenile chinook in the South Fork Nooksack River to raise to spawning age. The juveniles were genetically tested to sort out stray fish from hatchery programs and the South Fork Nooksack chinook were transferred to the WDFW Kendall Creek Hatchery for initial rearing. Later, half of the fish were retained to rear in fresh water at Kendall, while the other half were transferred to the NOAA Manchester Research Station for rearing in salt water.

The first offspring spawned from the captive broodstock were released in 2011. Project managers expect the program to peak in 2016 with the release of 1 million juveniles. Based on a conservative survival rate, more than 4,000 adult chinook could return to the South Fork Nooksack in 2019.

Historically, about 13,000 natural origin South Fork spring chinook spawned in the Nooksack River, but since 1999, surveys estimated that fewer than 100 native spring chinook returned as adults. Degraded and lost habitat are the main reasons for the population’s decline, as there are no directed harvest on the stock. Incidental catches, mostly in Canadian fisheries, are relatively insignificant.

“We needed to protect this population while we conduct extensive habitat work,” said Merle Jefferson, natural resources director for the Lummi Nation. “Our hope is that these fish, when they return, will jumpstart the population in restored habitat.”

Both the Nooksack Tribe and the Lummi Nation have done restoration work in the South Fork to re-establish suitable habitat for salmon to rear, feed and spawn.