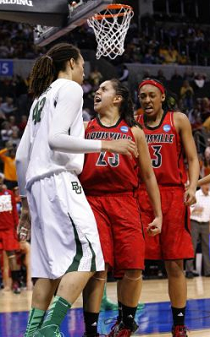 Shoni Schimmel, a 5-foot-9, senior guard for the Louisville women’s basketball program is one of 25 players that have been named to the 2013-14 preseason `Wade Watch’ list of candidates for the prestigious award.

The Mission, OR., native is coming off a sensational junior season where she averaged  14.2 points and 3.6 assists per game. She was named the Oklahoma City Regional Most Outstanding Player for her stellar performances in Louisville’s NCAA tournament run.

Schimmel won a gold medal over the summer with the United States team in the World University Games.

The preseason list is composed of top NCAA Division I women’s basketball players who best embody Wade’s spirit from 18 different institutions and seven conferences. A committee of coaches, administrators and media from across the United States compiled the list using the following criteria: game and season statistics, leadership, character, effect on their team, and overall playing ability.

The Lady Cards will start their 2013-14 season on Saturday Nov. 9 at the KFC Yum! Center against Loyola Chicago.