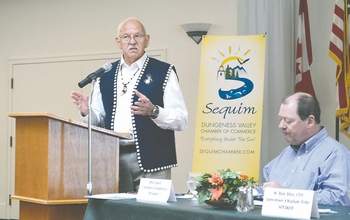 SEQUIM –– A philosophy of self-reliance has allowed the Jamestown S’Klallam tribe to withstand the federal government’s partial shutdown and continue to focus on projects for economic development, Tribal Chairman Ron Allen said Tuesday.

“Tribes are subject to the [federal government’s] decisions,” Allen told about 100 people at the Sequim-Dungeness Valley Chamber of Commerce during its luncheon meeting at SunLand Golf & Country Club.

Other tribes are cutting services, Allen said, after Congress failed to approve a measure to continue funding federal programs by midnight Oct. 1.

Allen said Lower Elwha Chairwoman Francis Charles told him earlier her tribe was cutting services because of the shutdown.

Charles told the Peninsula Daily News on Tuesday afternoon that the tribe had to shut down its child-care service because the employees who issue actual payments of grants received prior to the shutdown are furloughed.

Other programs will continue, Charles said, but the tribe has cut funding for some programs because of uncertainty about when federal funding will resume.

“It’s affecting the whole organization,” she said. “We just want to make sure we have a buffer in there if this goes longer than expected.”

Even after the government resumes operation, payments for the tribe’s child-care program may not arrive for months, Charles said.

“Even after they open up, it’s going to take them awhile to get started back up,” she said. “They’re going to be so behind on everything.”

The Jamestown S’Klallam have a diversified economy, Allen said.

“A lot of you look at the casino and say, ‘That’s where it’s coming from,’” Allen told the chamber crowd.

And while 7 Cedars Casino in Blyn employs more than 600 people, Allen said, the tribe also has kept a diverse mix of enterprises in its drive to stay self-reliant.

“S’Klallam means ‘strong people.’ We take that seriously,” he said.

JKT Development, the tribe’s business arm, is thriving in its construction, information technology and other sectors, Allen said.

The Jamestown Family Health Clinic in Sequim also is booming, he said, serving 12,000 patients and looking to expand.

The tribe’s dental clinic at Blyn also is busy, with its four dentists treating patients from as far away as Forks and Port Townsend, Allen said.

He attributed the tribe’s ability to treat patients on Medicare and Medicaid for driving usage at the health and dental clinics.

“We figured out a way to make it work,” he said of taking patients using federal insurance, which reimburses providers at lower rates than private insurers.

Expansion projects remain on the table, as well.

After remodeling the casino earlier this year, Allen said the tribe plans to build a 300-room hotel there and is planning a large conference center at the Cedars at Dungeness Golf Course.

But, Allen said, the resort, estimated to cost more than $75 million altogether, may take longer to actually see through as banks have tightened their lending practices since the Great Recession.

“The banks just don’t have that kind of money lying around anymore,” he said.