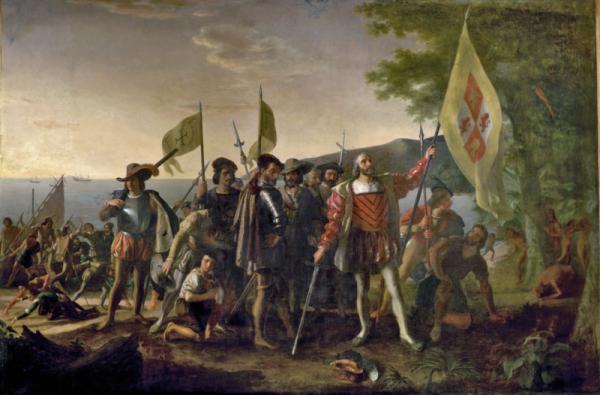 This Date in Native History: On October 12, 1492, Christopher Columbus landed on the island of Guanahani, now known as the Bahamas, wreaking hell and havoc as he went. The son of a weaver, Columbus left Spain with three ships and 39 crew members in the hopes of gaining fame and wealth.

As Columbus approached land, the local Natives, the Arawaks, swam out to greet the ships. Columbus later wrote,  “They are so naive and so free with their possessions that no one who has witnessed them would believe it,” and “They do not bear arms, and do not know them, for I showed them a sword, they took it by the edge and cut themselves out of ignorance… They would make fine servants… With 50 men we could subjugate them all and make them do whatever we want.”

In a search for gold, of which there was very little, Columbus enslaved, murdered, and inflicted every sort of inhumane misery upon those gentle people.

When the Arawaks could not produce enough gold, he cut off the hands of all those 14 years and older, and enslaved them on estates where they were worked to death. The most horrific reports came from a young priest, Bartolomé de Las Casas, who wrote, “The Spaniards think nothing of knifing Indians by tens and twenties and of cutting slices off them to test the sharpness of their blades.” He wrote of two Christians who met up with two Arawak boys and beheaded them for fun.

“Mothers drowned their babies from sheer desperation, husbands died in the mines, women died at work, children died from lack of milk… my eyes have seen acts so foreign to human nature, and now I tremble as I write,” de Las Casas wrote.

In schools, the story of Christopher Columbus is a tale of bravery and ambition, and throughout the Americas, he was given his own day.

The Atlantic Monthly article begins, “It’s worth remembering that the now-controversial holiday started as a way to empower immigrants and celebrate American diversity.” But is it really worth remembering in that way?

Kurt Kaltreider, of Nanticoke and Cherokee descent, wrote American Indian Prophesies, a book that begins with a fictional conversation about the very real atrocities inflicted upon Native Americans. He said there is only one way to understand the inhumanity of Columbus. “In many ways, it goes back to the Old Testament, in Psalm 2 line 8, ‘Ask of me, and I shall give thee the heathen for thine inheritance, and the uttermost parts of the earth for thy possession.’”

Kaltreider explained, “The Roman Empire, which was mostly Catholics, began to take over the majority of the Western World” under the principal “that any war in the name of Christianity was automatically just.”

“In absolute superiority, they claimed against others because of divine endowment, then ascribed it to being naturally superior,” Kaltrieder said. “The enemies of the crusaders were the enemies of their God. Slaughter and lies were not dishonest for the true religion, and so everything was okay. It graduated from religious conceptions to racial perceptions. Religious fanaticism is the same today, where you are only good if you are a follower of a particular God.”

That explanation may have worked for the 15th century, but what is it about American culture that still resists the truth more than 500 years later? Has it simply become a western tradition to do so?

Columbus’ crimes against humanity are no longer being accepted everywhere. Indigenous people throughout the Americas are now calling for the recognition of the truth.

In Caracas in 2004, according to the Venezuela Analysis News, “a group of young men and women tore down the statue of the 15th century explorer during this national holiday that was renamed the Day of Indigenous Resistance.”

In Denver, Colorado, Columbus Day protests have been held since 1989 when Russell Means, Lakota, was arrested for pouring fake blood on a statue of Columbus. Protests have been held annually and thousands of supporters have marched to do away with the day, but the protesters have continually met resistance from the Italian community.

Russell Means leads a chant during a protest of Columbus Day celebrations on October 12, 1998 in Pueblo, Colorado. The protesters gathered to show their opposition to the hanging of a wreath on a statue of Christopher Columbus by Pueblo’s Italian community.

Pennie Opal Plant, of Yaqui, Mexican, English, Dutch, Choctaw, Cherokee and Algonquin ancestry, is owner of the gallery Gathering Tribes in Berkeley, California. She remembers when the holiday was renamed Indigenous Day.  Groups of people met and organized in her gallery and stormed city hall meetings until they succeeded in changing the name.

“Italian people have had their history submerged for so long that they need to see Columbus was a genocidal maniac,” she said. “Reclaiming the rich, brilliant, Italian history is much more inspiring than claiming Columbus as a cultural icon.”