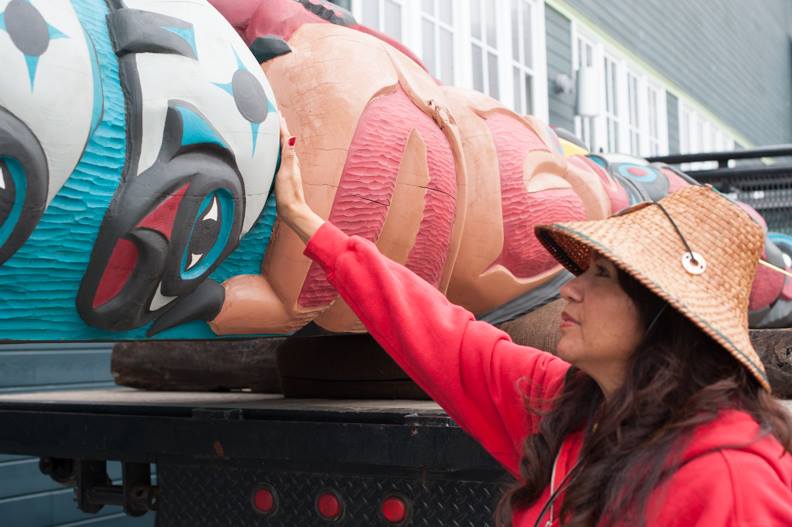 Offering solidarity to Indigenous Nations, last month five Carvers from the Lummi Nation House of Tears set out on a journey up the Pacific North West Coast hoping to send a message of Kwel’Hoy, or ‘We Draw The Line’ to the resource extraction industry. With them, lain carefully on the flat bed of a truck, the Lummi carried a beautifully-carved 22-foot cedar totem pole for Indigenous communities to bless along the way. Their journey gained international attention as a pilgrimage of hope, healing and determination for the embattled Indigenous Nations they visited.

The rich prairies and clear streams of Otter Creek, Montana, land of the Northern Cheyenne, were the first stop on the Totem Pole’s profound journey. Both the Lummi carvers who made the 1,200 mile trip inland and the Northern Cheyenne who received them, currently face major, interconnected threats from proposed coal mining developments. Bound by this common struggle the meeting of these Peoples resonated with a deep significance that replicated along the rest of the Lummi’s spiritual trail.

For several years now the Northern Cheyenne have been resisting Arch Coal Inc., the second largest coal producer in the U.S. In 2012, the company applied for permission to begin surface mining operations at Otter Creek spanning a vast 7,639-acre area. If the Montana State government approves of the company’s application, the impacts on public health, land, water and air quality would be significant, just as they have been elsewhere in Powder River country.

Other Indigenous Nations–including the Oglala Sioux whose traditional homelands and hunting grounds are located in southeastern Montana–have joined the Northern Cheyenne in their opposition to the proposed mine at Otter Creek. The impact of the proposed Arch Coal mine is also a concern to local ranchers, who are standing with their Northern Cheyenne neighbours. All parties are equally concerned about the likely impacts of the Tongue River Railroad Co’s proposed Tongue River railway that would serve Arch Coal’s Otter Creek mine. 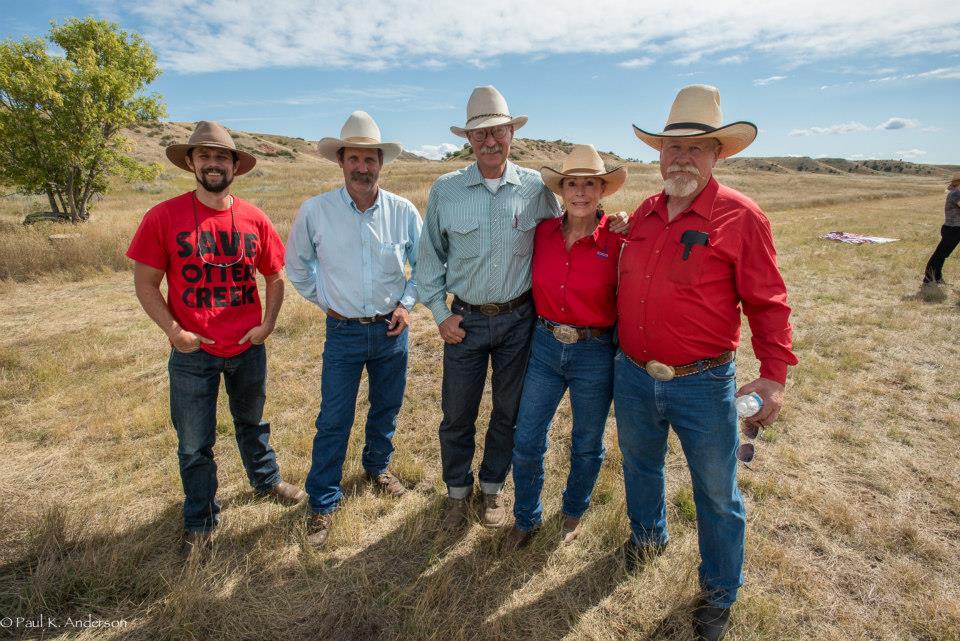 In both the case of the mine and the railroad, Indigenous and other local communities have complained of a lack of fair process. They feel foresaken by the Montana Department of Environmental Quality and the Surface Transportation Board, the bodies charged with ensuring a fair and transparent process. Both government agencies appear to be ignoring the cultural and environmental importance of the area and the desires of its residents in order to push both projects forward.

1,200 miles away, the Lummi Nation have been fighting a battle of their own. Pacific International Terminals plans to build the largest coal port in North America known as the Gateway Pacific Terminal, at Xwe’chi’eXen, or Cherry point, a Lummi ancestral village and burial ground. The new port, jointly owned by SSA Marine and Goldman Sachs, would become a hub for exporting coal from the interior. Coal from the Powder River Basin by Peabody Energy would be hauled by trains along BNSF rail lines from Montana and Wyoming through Sandpoint, Idaho, to Spokane, down through the Columbia River Gorge, then up along the Puget Sound coast to Cherry Point.

Linking the struggles of the Lummi and Northern Cheyenne Peoples, the railroads are raising concerns about impacts to human and environmental health as well local economies. The coal port itself poses a serious threat to the local and surrounding marine ecosystems and livelihoods, not to mention and the cultural and spiritual integrity of Cherry Point itself.

Speaking at the blessing of the Totem Pole at Otter Creek, Romona Charles, a Lummi carver, summed up the incredulity and resistance of the Lummi peoples to the proposed development saying: “It (Cherry Point) was an old village and it’s a known grave site. My people are from there…There has not been one time I thought, ‘Let’s go put a coal port at Arlington Cemetery.’” 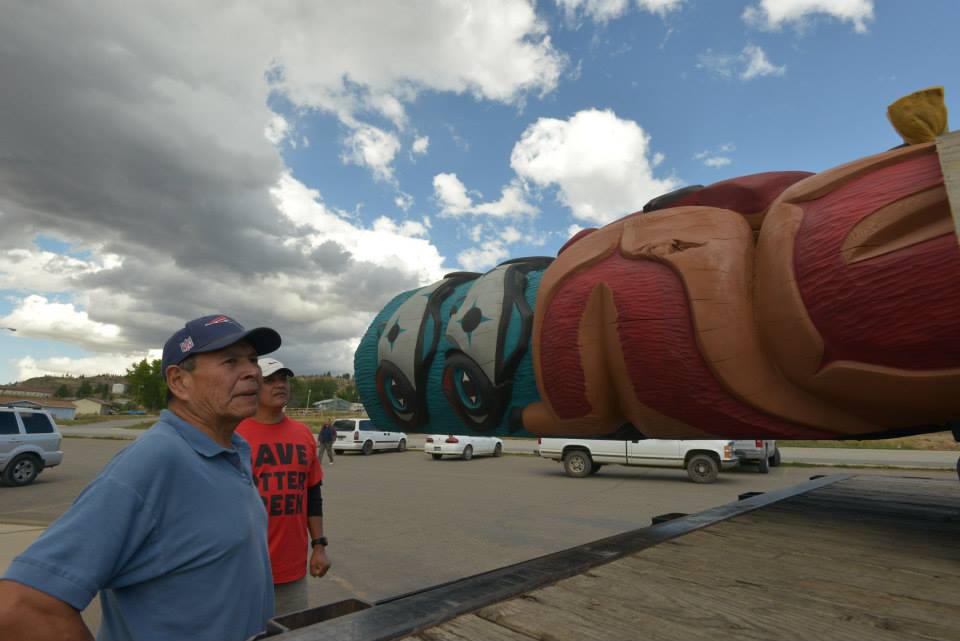 The reason Lummi, Northern Cheyenne and local communities in Puget Sound and Otter Creek are facing this unprecedented threat comes down to the fact that the US has begun to favour ‘new’ fossil fuels such as natural gas extracted via fracking. Gas-fired power stations are cheaper to construct and permissions are easier to obtain as, according to the authorities, natural gas has fewer environmental impacts. This domestic change of tide has left coal ‘unfashionable’ and shifted the focus of coal mining companies to exporting the mineral to Asian markets. To do this, the extractive industries require new links (the railroads) between the interior and the coast, and new export hubs (the ports) to send the coal off to the next leg of its trip across the Pacific Ocean.

The environmental cost of this change in tactics and the new infrastructure it requires is vast. At a time when anthropogenic climate change has been unequivocally proven, the exploitation of one of the dirtiest fossil fuels around–in order to generate power half way around the globe– spells even more trouble for people and planet.

United in this knowledge as well as the struggle for their lands, their sacred sites and their right to decide, about one hundred people including the Lummi and Northern Cheyenne, conservationists, ranchers and local community members met at Otter Creek for the blessing of the Totem. Sundance Priest Kenneth Medicine Bull, who conducted the ceremony, revealed the ritual’s significance as a way to find a solidarity that transcends the generations. Speaking after the ceremony, he stated, “We need to protect our way of life…I addressed the grandfathers, those who have gone before us, and I told them the reason we were here, and I asked them to hear our prayer and stand beside us.”

For those gathered, the symbolic giving of the Totem marked not only the visible unity of concerned individuals, groups and Nations, but a renewed commitment to say No to mining and destruction and Yes to the protection of life and the cultures that nurture it. This collective commitment is at the heart of the Totem’s message of Kwel’Hoy and the purpose of its journey, as Lummi master carver Jewell Praying Wolf James explained to those gathered:

“We kill the Earth as if we [have] a license to do it. We destroy life on it as if we were superior. And yet, deep inside, we know we can’t live without it. We’re all a part of creation and we have to find our spot in the circle of life…We’re concerned about protecting the environment as well as people’s health all the way from the Powder River to the West Coast… We’re traveling across the country to help unify people’s voices; it doesn’t matter who you are, where you are at or what race you are–red, black, white or yellow–we’re all in this together.”

Leaving Otter Creek and the Powder River Country and, in the following days, ritually winding their way up the Pacific North West Coast from community to community, the Lummi carvers continued to spread the key messages of one-ness and unity throughout the rest of the Totem’s journey.

On September 30, the Totem finally arrived on the lands of the Tsleil-Waututh community in North Vancouver, BC. There, in the company of those standing courageously at the forefront of the struggle against the pipelines of the Alberta Tar Sands, the people planted the Totem pole. A permanent symbol of solidarity and opposition to destruction, the Totem pole stands tall as a reminder of our sacred obligation to the Earth and each another.