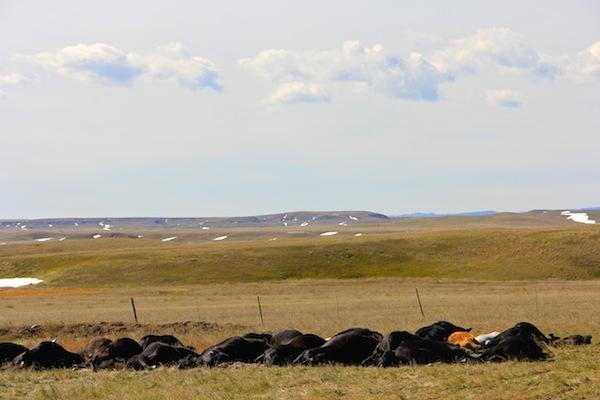 Christina Rose
Dead cattle await burial on the Pine Ridge Reservation after the record-breaking, rogue blizzard that hit South Dakota in early October. Newly elected NCAI President Brian Cladoosby is urging Congress to pass the stalled farm bill, which would help aid those who lost livestock in the disaster.

Fresh from his election as the 21st president of the National Congress of American Indians (NCAI), Brian Cladoosby has made it a priority to get aid for tribal members whose homes or livestock were wiped out by the record-breaking, early-season blizzard that devastated South Dakota and the Pine Ridge Reservation earlier this month.

RELATED: Brian Cladoosby Is President of the National Congress of American Indians

The government may have reopened, but in the wake of its 16-day shutdown, a key farm bill still languishes that would provide assistance to ranchers and landowners who lost millions when 100,000 cows, horses and other animals died in the blizzard, many of them on the Pine Ridge Reservation.

RELATED: Entombed in Snow: Up to 100,000 Cattle Perished Where They Stood in Rogue South Dakota Blizzard

“As I begin my term, my thoughts and prayers are with the South Dakota tribes,” Cladoosby said in a statement, his first since being elected on October 17. “The Oglala Sioux and Cheyenne River Sioux Tribes have been devastated by the recent storm that swept the Great Plains—and the federal government failed, again, to maintain treaty agreements that ensure disaster relief is provided when citizens are in distress. When the federal government neglects citizens in times of emergency, the effects can be long term.”

One of the bill’s provisions would be to make disaster relief available under the Livestock Indemnity Program, which would pay ranchers part of the animals’ market value, Reuters reported on October 8. The deadline to extend the 2008 farm bill was October 1—the very day that the government stopped working. Now the government is back in business, but a vote has yet to be held.

Members of the Senate and the House of Representatives are scheduled to meet next week to try and reconcile their respective versions of the bill, according to the Billings Gazette. It had already been stalled for months before the shutdown.

During the shutdown, livestock producers could not file the paperwork on their losses with the U.S. Department of Agriculture’s Farm Agency, Reuters said. All that state and tribal authorities could do was tell them to carefully document the losses as they buried their cattle and horses in mass graves.

Cladoosby, who is also chairman of the Swinomish Indian Tribal Community, said thresholds for assistance should be lowered for federal tribal disaster assistance and urged Congress to make Native issues a priority in the “post-shutdown calendar.”

Collapsing homes and widespread livestock losses are just the beginning, Cladoosby said, since the damage will cause tribal ranchers and farmers in South Dakota for years “as they will now have to rebuild their livelihoods from scratch.”

The first step, he said, should be to pass the farm bill.

“Allowing the current Farm Bill to lapse without action, coupled with the government shutdown, meant that support systems at the Department of Agriculture were unavailable to Native farmers and ranchers during this terrible storm,” Cladoosby said.

“Congress must pass a Farm Bill that will support tribal nations and others around the country who are in dire straits and it must keep nutrition programs with farm policies because there should never be a disconnect between food production and feeding people,” he said. “Congress must act immediately to provide rapid recovery for our tribes and work to ensure that political gamesmanship and inactivity does not harm Native peoples again.”

Help from the Federal Emergency Management Agency (FEMA) can go only so far, even with the Stafford Act allowing tribes to apply in their own right, Cladoosby said, because aid doesn’t kick in at the amounts of money that people make, and lost in the disaster. The dollar amount triggering aid eligibility needs to be lower, he said.

“The high monetary damages threshold hampers impoverished areas because what is lost by low-income citizens often does not meet the required amount,” Cladoosby said. “The federal government has a fiduciary duty to protect tribal citizens, but without changes to the threshold, tribal citizens will continue to suffer from the consequences of disasters.”

He added the lack of action not only violated treaty and sovereignty rights but also cut off food supply to many tribal members.

“These failures of Congress prolong the claims process and inhibit Native food production and economic development,” Cladoosby said. “Further, with no Farm Bill and the lack of government funding for food assistance programs, many tribal citizens were left without access to food all while these vital programs are used as political bargaining chips. No one—especially our tribal citizens most in need—should ever have to go without food while being used as pawns in the lawmaking process.”