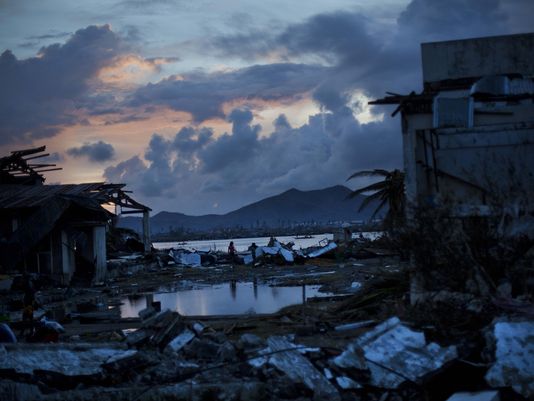 In the especially hard-hit city of Tacloban, where the mayor’s office estimates that between 5,000 and 10,000 people may have died — though the president’s office says the death toll may be somewhat lower — hungry survivors expressed anger at the lack of help while sporadic looting continued despite armed police patrolling streets that appear part war zone and part garbage dump.

“I live on the road from the airport and I haven’t seen any goods coming out,” said businessman Noel Mateo, 50, who lost five of his seven trucks to storm surge Friday. “I don’t see any reason at all why they can’t give out the stocks,” he said. Mateo said he has heard “good news” on his radio about extensive relief.

To improve the response, the central government is now taking over in Tacloban, said Thelma Barerra, a Dept. of Heath official who led a team of psychological health workers that flew in with 55 doctors from Manila hospitals Tuesday.

“Just like the (2004) tsunami in Indonesia, all service providers have been affected from the mayor on down, so organization has not been good yet and needs central government control,” she said.

“The city government is still trying to be in charge, but we have no capacity,” said Tecson John S. Lim, the Tacloban city administrator Wednesday.

“The central government does what they think they should, and we coordinate,” he said. The city will be without power for another three months, said Lim, although the Philippine energy secretary mandated the process be completed in two months, he said.

According to Barerra, the damage is even worse in Tacloban than in Banda Aceh where she assisted in 2004, when the devastating Christmas-time tsunami struck. Her own team still lacks their medical and goods supplies, stuck at Tacloban airport Wednesday.

Help from abroad is arriving but experiencing similar difficulties.

A 40-strong Belgian emergency response team flew 30 hours and landed Tuesday morning, ready to set up a tent hospital. But all their equipment and medical supplies remained stuck at the airport Wednesday, said Koenraad Schwatgen, a member of the B-FAST team.

“It’s frustrating but understandable. We have to adapt to local conditions,” he said. “We are here to help them in their way, but we always want to help a little bit faster.”

Schwatgen guessed Filipino officials were giving priority to shifting food and water supplies out of the airport. The terminal building was destroyed in the storm but the runway is functional.

Yet residents are seeing little evidence of food and water relief getting through, a scenario that is compounding the pain for survivors still searching for missing relatives.

“No supplies have reached us,” said Edward Bongcaras, 43, who is worried about his two children in south Samar province, a badly hit area where communications have still not been reestablished.