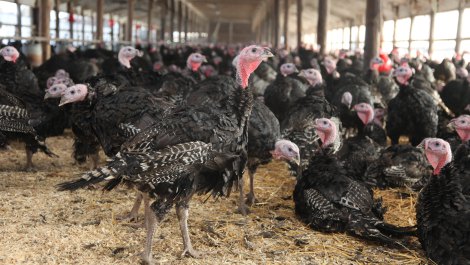 Once upon a time, in a land called the grocery store, customers could walk right in, grab a turkey, and take it home for Thanksgiving. The only choice to make was about size: big, huge, or insanely enormous? It was a time before words like “heritage” and “organic” became part of our food lexicon; back then, a bird was a bird, and feeding it low dosages of antibiotics in every meal had yet to be connected to the spread of antimicrobial resistant superbugs. It was a simpler time for the American Thanksgiving, but not a better one.

The turkey aisle has a lot more variety now, but it hasn’t made picking the best one easy. Free-range? Organic? Heirloom? Heritage? Is there a difference, and does it matter? Yes and maybe.

But before we delve into the specifics of one good bird versus another, it’s worth noting that all of these are better options than your standard Butterball or otherwise-branded factory farmed meal. The overwhelming majority of the 46 million turkeys that will be eaten this year on Thanksgiving will be CAFO-raised Broad Breasted Whites (BBWs) that each spent their lives in a giant, crowded, filthy shed with ten thousand other turkeys, including some that are dead or diseased. Their diets will have included regular dosages of antibiotics, making them more likely to be carrying antibiotic-resistant bacteria. They will grow to be three times heavier than they would have been in 1929, seriously debilitating them as their unnatural weight wears on their crippled feet and swollen joints. Many of these poor birds will have been thrown, beaten, or otherwise brutalized before finally enduring a cruel death. Add to that the environmental damage of industrial farming, allegations of employee abuse, and lurking dangers like salmonella, and your typical Thanksgiving centerpiece becomes a representation of all that is wrong with our food system. So as long as you avoid one of these, applaud yourself: You are doing humanity and turkeydom alike a serious favor.

But even though the only way is up, it’s still hard to figure out where to go from there. So I ventured into hinterlands of rural Pennsylvania to visit Duane Koch at Koch’s Turkey Farm, where his family has been raising turkeys of all kinds – from organic to free-range to heirloom – since 1939. Rearing about 700,000 turkeys every year, Koch’s farm sounds like a Big Kahuna until you compare it to the rest of the industry: Just three companies raise more than half of the country’s 265 million birds.

Duane himself, in his jeans, hiking boots, and baseball cap, bears little resemblance to his suit-wearing Big Turkey counterparts. It’s hard to imagine Butterball CEO Rod Brenneman spending his days getting gritty on a farm, talking about which of the birds are more docile and which are “spooky.”

Unlike the industrial version, Koch’s tall, white turkeys are all antibiotic-free and raised with the luxury of space. The free-range BBWs get plenty of outdoor access – though whether they choose to exercise that freedom is a decision every bird gets to make for itself. They leave the spacious barn for the yard outside, according to Duane, “whenever they feel like it.” They have no problem running when they want to, and as little chicks, before their D-Cups begin to runneth over, they can even fly over the surrounding fence. “Not a lot do,” Duane says, “but they can.”

Koch’s farm also raises organics, and more this year than ever. “A lot of people are scared of GMO grains,” Duane says, attributing the 30 percent increase in demand this year to that fear. His organics, like most, are BBWs, and consumers can rest assured that they were raised without antibiotics, growth enhancers, or GMO feed. They also have all the free-range amenities, including the outdoor space and the freedom to go in and out at their own leisure.

But although the BBWs have essentially cornered the Thanksgiving market, heritage and heirloom breed turkeys have been gaining traction. Unlike their modern, bred-for-breasts counterparts, these old birds are actually that: Heritage breeds date back to the 1800s, and so were probably what our colonial forebears were carving into. Heirloom breeds are a bit newer, dating to the early 1920s or 1930s.

A heritage bird, according to Whole Foods Global Meat Buyer Theo Weening, “is as close to a wild turkey as you can get.” They can fly like their wild cousins, and can technically reproduce naturally, though many farmers still “choose to artificially inseminate to meet demands.” Their genetics give them the multicolored feathers we envision on the hallowed First Thanksgiving turkeys, as well as significantly less white meat and a “gamey-er” taste, making them more like wild turkeys and less like the kind we’re used to eating. While Koch’s tried to raise heritages one year, they decided it wasn’t worth the investment. His flock grew slowly and had a higher mortality rate, too. “We can only get the poults [baby males] from these little hatcheries,” he said. “And a lot of them die the first week when you get them.” At $12 a pop, compared to $1 for a BBW, the Koch’s turned their focus to heirlooms, which come in in the middle at $6.

Heirlooms seem to strike a balance for Americans looking for something that harkens back to the days of yore but still tastes somewhat familiar. Like their heritage cousins, they have dark feathers, and their flavor is more robust and the meat more dense than your standard BBW — but they also have plenty of the white meat that Americans inexplicably crave. (Why anyone would prefer white meat over dark still baffles me – I might be a vegetarian, but I remember the dry lack of flavor.) Koch has been raising heirlooms for six years, with demand growing exponentially. “The first year we sold six hundred of them; this year we sold 12,000.” Duane said. “Next year, I’m going to have to grow more.”

On Koch’s farm, the heirlooms also get plenty of outdoor access and seem to enjoy it more than the BBWs in the barn nearby. “You should see them in the morning,” Duane says. “When you lead them out – they’re so happy!” (Barns stay closed at night to protect against predators like coyotes and foxes.) While Koch’s heirlooms aren’t technically organic, they still benefit from their proximity to the organic BBWs: When there’s leftover organic hay, guess who gets to eat it?

All of Koch’s birds, even the ones that aren’t free-range, are Certified Humane, which is representative of the growing third-party certification trend. Other popular certifiers include Animal Welfare Approved, Food Alliance Certified, and American Grassfed, and all come with their own sets of standards, though humane treatment is always part of the deal. (“All natural,” it should be mentioned, is utterly meaningless and should never be solely relied upon when choosing food — whether it’s turkey, pork, or Gatorade.)

For many consumers, animal welfare isn’t the only concern. Price is obviously a big selling point, too. Heritage turkeys (which can fetch as much as $10 per pound) are generally the most expensive, followed by organic, then the heirlooms, and finally, the non-organic, free-range, antibiotic-free BBWs. If cost is your determinative factor, don’t feel bad. There’s no consensus on which bird is the best. Even Duane’s own family, which will be carving up an heirloom on the Big Day, can’t agree that it’s the best option. “My dad’s a firm believer that they’re the best,” Duane says. “But I like them all, and my sisters [prefer] the organics.”