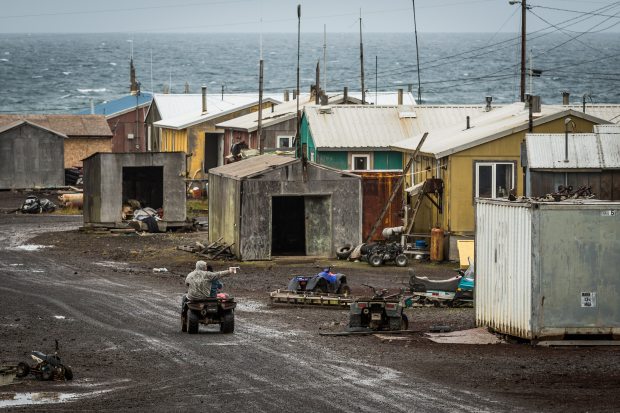 A boy rides a four-wheeler through the rural Alaska community of Savoonga on Saint Lawrence Island in the Bering Sea. Loren Holmes photo

Members of a Congressionally-created panel that blasted the state’s justice system for Alaska Native villages arrived in Anchorage on Wednesday, where they took on a top state official and publicly pushed for reform to give Alaska tribes more local authority over criminal matters.

“It’s clear to us Alaska remains on the wrong track,” said Troy Eid, chairman of the Indian Law and Order Commission (ILOC), which issued its scathing report last month. “The problems tribes face in the Lower 48 are magnified in Alaska, which still relies on a colonial model (of justice) that results in more violent crime.”

The report, “A Roadmap for Making Native America Safer,” called for expanded tribal authority to address violence and crime in Indian Country and Alaska Native villages.

Alaska Attorney General Michael Geraghty on Tuesday fired off a letter to Eid, taking issue with aspects of the report and acknowledging some of the problems in the state’s justice system. He said Alaska must work with tribes to improve public safety, and highlighted steps taken under Gov. Sean Parnell to make villages safer.

Ultimately, Geraghty opposed the report’s recommendation that Indian Country be created in Alaska as it is in the Lower 48, where tribes own land. That status means Lower 48 tribes enjoy rights not afforded Alaska Native tribes.

” … The state believes the commission was wide of the mark in recommending a return to Indian country as a means for solving the admittedly serious public safety issues facing our Native peoples,” reads the letter.

More than 200 Alaska Native villages suffer some of the nation’s highest rates of domestic violence, sexual assault, suicide and other problems.

Meanwhile, scores of villages lack police and quick access to courts and other basic services. Often, victims must wait for Alaska State Troopers based in other communities to fly in before crimes can be investigated, a process that can take days in stormy weather.

“We are fighting for our lives here. We have the highest rates of almost all deplorable conditions known to mankind,” said Mary Ann Mills, tribal council chairperson for the Kenaitze Indian Tribe, in a question-and-answer session following presentations by Eid and the other ILOC commissioners at the Dena’ina Convention Center in Anchorage Wednesday morning. Mills was just one of several tribal representatives from around the state who came to listen to the commission’s findings, and who overwhelmingly expressed support for tribal sovereignty.

“The current system is broken,” said Eid. “You have 75 communities with no policing at all. And then you have 100 VPSOs (village public safety officers) who don’t carry firearms and can’t provide the full range of services that a state sworn officer can provide.”

The nine-person commission sunsets in January. Commissioners came to Alaska last year to conduct interviews for the report. Eid and two others returned this week to speak at the Bureau of Indian Affairs’ rural providers conference in Anchorage. Eid also planned to meet with Geraghty on Wednesday afternoon.

‘Not just an Alaska problem’

“This is not just an Alaska problem. But I know injustice when I see it,” Eid said at the conference.

“We’re not a bunch of radicals. We are not bomb throwers. We just think that self government should be the rule in Alaska,” he said, noting that he’s a lifelong Republican and was appointed by Sen. Harry Reid, D-Nev. His point? The commissioners come from varied political backgrounds, yet they unanimously came to the same conclusion about the abysmal safety conditions in rural Alaska.

At the conference, commissioners and Alaskans renewed their calls for the creation of Indian Country in Alaska. The courts decided long ago that unlike the Lower 48, virtually no tribal lands existed in Alaska.

The distinction has limited the federal benefits that flow to Alaska tribes. A stark example of that disparity came earlier this year with the reauthorization of the Violence Against Women Act that granted new criminal jurisdiction to Lower 48 tribes, including the ability to issue civil protective orders to arrest and detain any person. Alaska tribes did not receive such powers.

On Tuesday, Geraghty had his letter delivered to Eid’s room at the Captain Cook Hotel, so Eid could understand the state’s views before the two met. Hotel staff placed the letter on Eid’s pillow for him to read when he arrived, “without the mint,” Eid joked.

Geraghty said the commission’s urgent challenge resonates with him. “The state of Alaska can, and should, be doing more to work collaboratively with local tribes to improve public safety,” he said.

He noted the Department of Law has drafted a plan that would allow tribes to address certain domestic violence, alcohol-related or misdemeanor offenses. The accused could choose civil remedies in tribal court instead of facing state criminal charges.

The state has also adopted a template memorandum of understanding for villages that have banned alcohol. A local council would issue “restorative justice remedies in lieu of citation for alcohol possession,” said Geraghty. He conceded that illegal possession “is an offense which is rarely prosecuted in small rural communities.”

Geraghty also noted that the state’s rural force of public safety officers has roughly doubled in recent years, to more than 100. Draft regulations to allow public safety officers to carry firearms is in a public-comment period. Arming officers was something another ILOC commissioner, Ted Quasala, said was as basic as it gets.

“There is no other law enforcement agency anywhere, outside of here, where you have unarmed officers who respond to very violent and volatile situations. There is no way you are going to send an unarmed officer to those situations alone, by themselves (in the rest of America),” said Quasala, who has law enforcement experience. He has previously worked as a tribal police chief and as director of the Bureau of Indian Affairs’ Office of Law Enforcement Services.

In his letter, Geraghty also noted that Parnell has started annual marches to raise awareness about domestic violence and sexual assault in 160 communities.

“The fact is we will not solve this problem solely through arrest and prosecution — though that is obviously an important component. Instead we must also raise awareness and educate our kids,” the letter said.

Geraghty called that language “inappropriate. We have admittedly a long way to go to solve this problem but I think the commission does a disservice to the state when it paints with such a broad brush,” he said.

Eid said he was encouraged to see Geraghty express support for the report’s findings, but he added that establishing Indian Country in Alaska isn’t the only solution.

In fact, the report spells out numerous ways to improve rural justice, he said, including that the president, through executive order, allow the Bureau of Indian Affairs to provide funding for tribal police in Alaska, a benefit enjoyed by Lower 48 tribes, but not those in Alaska.

Tribes don’t actually have to own land to have more authority, Eid noted. One thing the state can do now is define boundaries where tribes can have increased criminal jurisdiction, even though they don’t own the land.

“We all agree the situation in Alaska is a problem, and that Alaska is out of step with the U.S.,” Eid said. “The way to address the problem is more local control and local decision making.”