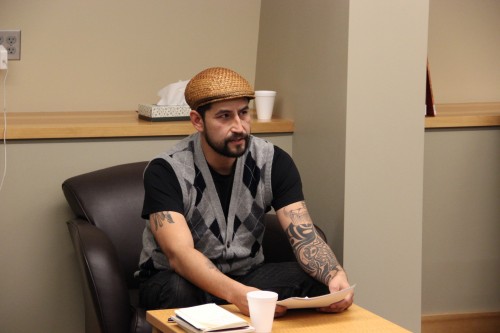 Paul Rowley presented his poetry as a narrative of his Indian Experience. His most recent work is inspired by his reflections on Indian Country over the course of the month of November, Native American Heritage Month. Rowley attempts to highlight the perpetual mistreatment and apathy towards Native peoples, using stereotypes to identify the issues.

Hosted in the museum library, the poetry sessions are quite intimate. The small audience is familiar with each other, and gets to know the poet of the evening. The open-mic forum is used for artist Q&A and for other poets to share; for December, Chad Charlie was another indigenous poet who shared a poem inspired his experience growing up in the generational trauma and disconnect that exists on every reservation.

Rowley, who is of Haida, Tlingit, Blackfoot, and Cree descent, was born and raised in SeattleWashington. Moving to Portland to attend PortlandStateUniversity, Rowley has completed his undergraduate degree in Political Science, finishing with a Masters of Fine Arts from PacificUniversity. He currently lives between Portland and Tulalip.

For more information on this and other programs contact the HibulbCulturalCenter and Natural History Preserve by phone at (360) 716-2600, or online at http://www.hibulbculturalcenter.org/.