Wesleyan University opened the Orange Judd Hall of Natural Science in 1871 and the museum displayed sacred Native American objects alongside curiosities that included dinosaur tracks, a stuffed bison and an Egyptian mummy.

BY ERIK HESSELBERG, Special to The Courant The Hartford Courant

MIDDLETOWN — Graveyards are sacred, but for many Native Americans their journey into the spirit world was interrupted when their ancient burial grounds were dug up in the name of science. For example, in 1948, the University of California Berkeley boasted to Life magazine that the university held in storage “more than 10,000 Indian skeletons, many of them complete.”

Wesleyan University too collected Native American relics, but the university recently announced that it was returning the human remains of some 15 Native Americans held for more than 100 years.

Wesleyan has been discreet about returning the remains, revealing its intentions only on its website. The university also posted a formal apology “to all Native Nations and indigenous peoples” for keeping the relics so long.

Asked to elaborate, Wesleyan spokeswoman Kate Carlisle said, “The information on the website is really all I can offer you at this time.”

For Native Americans, the objects are considered so sacred that tribes insist they neither be photographed nor itemized publicly. Wesleyan is believed to possess associated funerary objects in addition to the human remains.

“It’s certainly a positive thing,” Kevin McBride, a University of Connecticut archaeologist and the research director of the Mashantucket Pequot Museum, said of Wesleyan’s decision. “Repatriation is not all easy to address – it’s a time-consuming, but it’s necessary.” 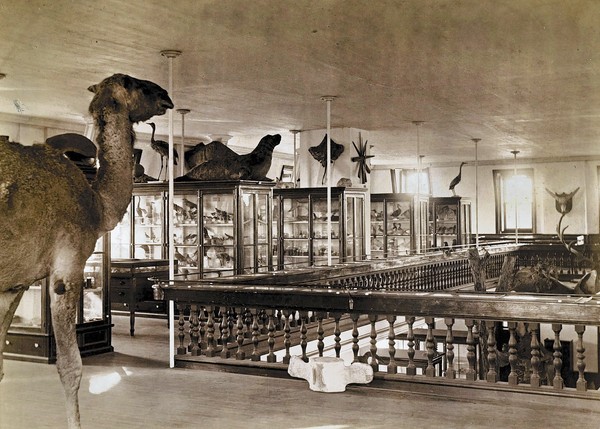 Wesleyan University opened the Orange Judd Hall of Natural Science in 1871 and the museum displayed sacred Native American objects alongside curiosities that included dinosaur tracks, a stuffed bison and an Egyptian mummy. In its early years it was managed by Wesleyan graduate George Brown Goode, who had worked in marine science at Harvard under Louis Agassiz. Goode sent teams of fossil hunters out West to dig up dinosaur bones, where they also gathered Indian artifacts for his museum. During the 1930s, the Judd Hall natural history museum welcomed hundreds of Middletown school children on field trips.The museum closed in 1957. (Wesleyan University Library, Special Collections & Archives / November 29, 2013)

The museum in its early years was managed by a Wesleyan graduate, George Brown Goode, who had worked in marine science at Harvard. Goode was later employed by the Smithsonian, where he became a pioneer museum administrator overseeing numerous exhibits, including one on the latest sports equipment.

At Wesleyan, Goode sent teams of fossil hunters out West to dig up dinosaur bones, and they also gathered Native American artifacts for the museum.

In 1957, when the museum closed, thousands of artifacts, including Native American relics, were boxed up and put into storage.

Wesleyan was nudged into federal compliance by several of its professors, principally J. Kehaulani Kauanui, associate professor of anthropology and American studies, and Donald Moon, professor of government and environmental studies. In 2010, Kauanui and Moon organized a panel discussion, “Reconsidering Repatriation: Colonial Legacies, Indigenous Politics and Institutional Developments,” in which the federal process was reviewed and strategies for compliance developed.

At the time, Wesleyan had been noncompliant for 15 years, according to a Nov. 16, 2010, article in The Wesleyan Argus, the college newspaper.

Complying with the federal artifacts law requires inventorying museum collections. Then lists have to be sent to the more 500 recognized tribes in the United States.

To assist with the process Wesleyan hired a repatriation coordinator, Honor Keeler, a lawyer who is part Cherokee. The university said it expects repatriation to take several years.

Wesleyan’s Native American relics have been traced to tribes in Connecticut, Illinois and Tennessee, according to Doug Charles, chair of Wesleyan’s anthropology department. Charles told the Argus in 2010 that Wesleyan had provided tribes with summaries of Wesleyan’s holdings, but until then there had been no requests for repatriation.

McBride said he wasn’t sure whether any Wesleyan artifacts had any connection to the Pequots, which once held sway over the lower Connecticut River Valley and Long Island Sound. He said he looks forward to reviewing Wesleyan’s inventory.

“I have attended reinterment ceremonies following repatriation and they are deeply moving,” McBride said. “There are tears of anguish and of joy. You have to understand, these are their ancestors – and they are finally coming home.”