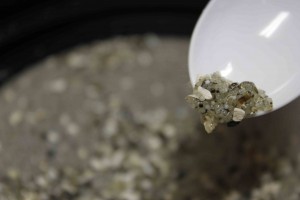 Point No Point Treaty Council biologists are counting forage fish eggs so they can get a better idea of what food is available for salmon.

Shannon Miller and John Hagan keep a close eye on the phases of the moon so they can determine the best time of the month to collect samples of pinhead-sized translucent forage fish eggs.

“We found that the moon phases may be a potential spawning cue,” Miller said. “There are more eggs around the new moon and full moon phases during the fall and winter months, so we schedule our surveys around that and the tides. That makes for an interesting work schedule.”

Miller and Hagan are Point No Point Treaty Council (PNPTC) biologists who are studying the spawning rates of surf smelt and pacific sand lance, both important food sources for salmon. The PNPTC is a natural resources management agency for the Port Gamble and Jamestown S’Klallam tribes.

Past studies have focused on the presence or absence of eggs in the intertidal zone but have not necessarily tracked egg densities,” Miller said. “We’re trying to build a better quantitative data set to see if they’re reproducing enough offspring for salmon to eat. They’re an important part of the food chain and an indicator of the health of the sound’s ecosystem.”

Since 2011, they have been collecting bags of sand from beaches on Indian Island, in areas with prime forage fish habitat, which includes sandy gravel shores. The bags are taken back to the PNPTC lab, where the eggs are separated from the sand and then individually counted. In the 2011-2012 sampling period, more than 450,000 eggs were sampled.

“We’re finding many more eggs than in past studies, but we are also sampling more intensively,” Miller said.

This five-year project will also look at the timing of incubation and emergence of forage fish embryos, as well as the environmental conditions for spawning, such as water temperature, that determine successful spawning rates.

Partners in the project include the U.S. Navy, Washington Department of Fish and Wildlife, Puget Sound Partnership and the Environmental Protection Agency.