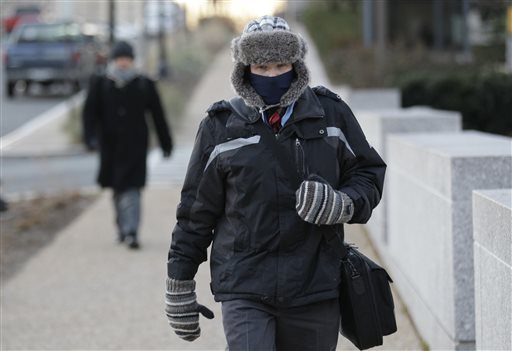 A person walks in frigid temperatures near Constitution Avenue, Tuesday, Jan. 7, 2014, in Washington. The National Weather Service said the mercury bottomed out at 3 degrees before sunrise at Baltimore-Washington Thurgood Marshall International Airport, with a wind chill of minus 16. (AP Photo/Luis M. Alvarez)

As temperatures plummet, a reminder: ‘Every weather event in the modern world is attributable to climate change.’
By John Queally Mint Press News

Weather isn’t climate and the climate isn’t weather, but if someone asks whether the ‘polar vortex’ now being experience by tens of millions of people across the country is driven by climate change, you don’t have to wait for the next wave of scientific research to come out. The answer is ‘Yes.’

Sadly and predictably, however—as much of the nation faces the coldest temperatures seen in nearly two decades on Monday and into Tuesday— the push of bone-chilling arctic air into southern Canada and much of the United States has the climate change denialists pushing their familiar falsehoods about how near-record lows nationwide somehow disproves global warming.

In just one example, multi-millionaire and political pundit Donald Trump took to Fox News on Monday morning to say that the freezing temperatures help prove that there is a great “hoax” around climate change. “You know,” Tump said when asked to explain, “I think the scientists are having a lot of fun.”

On Monday, federal and state agencies issued dire warnings about freezing temperatures that have blanketed the midwest, saying that millions of Americans are under threat by windchill temperatures today and tomorrow that could be life-threatening. Temperature readings, factoring in windchill effect, were reported as low as -63°F in Montana and -50°F in places in North Dakota and Minnesota.

But the effort by Trump and others to portray the phenomenon known as the “arctic vortex” as some an event that discredits the international scientific consensus on the relationship between industrial society’s relationship to planetary climate change, however, is being met with a firm rebuke of its own by climate activists, weather experts, and scientists.

No, the cold snap doesn’t mean global warming is over, the Arctic is just drunk: http://bit.ly/1cwuOOP

The article referenced by Henn, wrriten by Greg Landen at ScienceBlogs.com, says that the “apparent contrast between extreme cold and global warming is actually an illusion.”

In what way? Landen continues:

The Polar Vortex, a huge system of moving swirling air that normally contains the polar cold air, has shifted so it is not sitting right on the pole as it usually does. We are not seeing an expansion of cold, an ice age, or an anti-global warming phenomenon. We are seeing the usual cold polar air taking an excursion.

So, this cold weather we are having does not disprove global warming.

In fact, it may be because of global warming. The Polar Vortex can go off center any given winter, but we have been having some strange large scale weather activity over the last few years that is thought to be related to global warming that may have contributed to this particular weather event (explained here). This may be an effect of this strangeness, though the jury is still probably out on this particular weather event.

According to Dr. Dim Coumou, a senior scientist at the Potsdam Institute for Climate Impact Research (PIK) near Berlin, who spoke to Agence France-Presse, what drives the polar vortex is the difference in temperature between the Arctic region and those in the mid-latitudes closer to the equator.

“The reason why we see these strong meanderings is still not fully settled,” Coumou told AFP, “but it’s clear that the Arctic has been warming very rapidly. We have good data on this. Arctic temperatures have risen much more than other parts of the globe.”

The idea that any particular “weather event” is or is not climate change, however, belies the deeper fact that all weather events are complex results of underlying climate conditions. As Jim Naureckas, a journalist at the media watchdog group FAIR, explained to his readers in the aftermath of Typhoon Haiyan in the Philippines last year, “attributing particular weather events to climate change is ridiculously easy.”

The reason for that, he continues, is because (emphasis his):

“Every weather event in the modern world is attributable to climate change.  This is because weather is a chaotic system, which is to say it varies wildly based on initial conditions. Once we raised global temperature by a degree Celsius—which is an enormous intervention in the physical world—we irrevocably changed all weather, producing an entirely different set of events than the ones that would have otherwise occurred.”

In other words, the whole debate about whether this hurricane, that tornado, or the current ‘polar vortex’ is or isn’t climate change misses the point.

Writing about the climate dynamics that are driving the current ‘polar vortex’ event Jeff Masters, meteorologist and founder of the popular Wunderground blog, explains:

In the winter, the 24-hour darkness over the snow and ice-covered polar regions allows a huge dome of cold air to form. This cold air increases the difference in temperature between the pole and the Equator, and leads to an intensification of the strong upper-level winds of the jet stream. The strong jet stream winds act to isolate the polar regions from intrusions of warmer air, creating a “polar vortex” of frigid counter-clockwise swirling air over the Arctic. The chaotic flow of the air in the polar vortex sometimes allows a large dip (a sharp trough of low pressure) to form in the jet stream over North America, allowing the Arctic air that had been steadily cooling in the northern reaches of Canada in areas with 24-hour darkness to spill southwards deep into the United States. In theory, the 1.5°F increase in global surface temperatures that Earth has experienced since 1880 due to global warming should reduce the frequency of 1-in-20 year extreme cold weather events like the current one. However, it is possible that climate change could alter jet stream circulation patterns in a way that could increase the incidence of unusual jet stream “kinks” that allow cold air to spill southwards over the Eastern U.S., a topic I have blogged about extensively, and plan to say more about later this week.

Lastly, this video posted at the Mother Nature Network and featuring Masters as well as Rutgers University professor Jennifer Francis, helps explain the dynamics by which a warming planet can result in freezing cold weather patterns and extremes of all kinds: