BELLINGHAM, Wash. — Dozens upon dozens of crab pot buoys dot the waters around Jay Julius’ fishing boat as he points the bow towards Cherry Point. The spit of land juts into northern Puget Sound.

SSA Marine says Cherry Point is an excellent location to build a terminal because it’s surrounded by deep water with quick access to the Strait of Juan de Fuca and the Pacific Ocean. If the company has its way, up to 48 million tons of coal could move through these waters each year aboard more than 450 large ships bound for the Asian market.

But if the Lummi and other tribes exercise their treaty fishing rights, there may not be any coal ships servicing American terminals in these waters.

‘People of the Sea’

One out of every ten members of the Lummi Nation has a fishing license. Ancestors of the Lummi, or “People of the Sea” as they are known, and other Salish Sea peoples have fished the waters surrounding Cherry Point for more than 3,000 years. Today Lummi tribal officials are sounding the alarm about the impacts the Gateway Pacific Terminal could have on the tribe’s halibut, shrimp, shellfish and salmon fishery, which is worth a combined copy5 million annually.

“You have numerous fishermen up here right now,” says Julius, a member of the Lummi tribal council. He’s gesturing at the nearby crab pots as his boat idles a little more than 50 yards from the proposed site of the Gateway Pacific Terminal, one of three coal export facilities under consideration in Oregon and Washington. “What does that mean to our treaty right to fish? This would be no more.”

In the mid-1800s tribes in this region signed treaties with the federal government, ceding millions of acres of their land. Native American populations plummeted and the survivors were relegated to reservations. But the tribal leaders of the time did a very smart thing, says Tim Brewer, a lawyer with the Tulalip tribe in northwestern Washington.

“They insisted on reserving the right to continue to fish in their usual and accustomed fishing areas. It is an extremely important part of the treaty,” Brewer says. 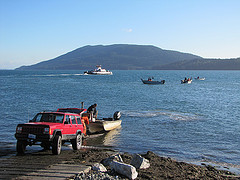 Lummi tribal fishermen at the end of a day on the water. (Ashley Ahearn)

Those treaty rights weren’t enforced in Washington until a landmark court decision in 1974 known as the Boldt Decision. It forced the state to follow up on the treaty promise of fishing rights that were made to the tribes more than a century before.

Brewer says the phrase: “usual and accustomed”—language that appears in the treaties signed by the Lummi and many other Northwest tribes—has implications for development projects, like coal terminals.

“If a project is going to impair access to a fishing ground and that impairment is significant that project can not move forward without violating the treaty right,” he says.

Since the mid-‘70s, tribes have begun to flex those treaty muscles.

In 1992 the Lummi stopped a net pen fish farm that was proposed for the waters off of Lummi Island by a company called Northwest Sea Farms.

The Lummi demonstrated that constructing the floating net pens would block tribal access to their usual and accustomed fishing grounds. “In that case the (U.S. Army) Corps of Engineers denied that permit on that basis,” Brewer says. “There was no agreement that was able to be worked out there.”

But, in other situations, agreements have been made. 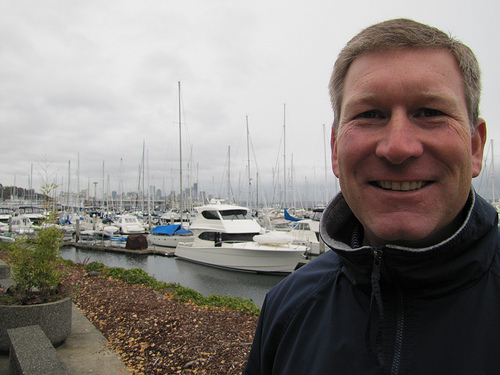 Though it’s a ways away, the iconic Seattle Space Needle peeks out amongst the masts of hundreds of sailboats neatly tucked into their berths at the Elliott Bay Marina, just north of downtown. It’s the largest privately-owned marina on the West Coast. And it was built within the usual and accustomed fishing area of the Muckleshoot tribe, back in 1991.

It took 10 years of environmental review. The Muckleshoot fought the project.

“It was contentious, I guess would be the right word,” says Dwight Jones, the general manager of Elliott Bay Marina. The Muckleshoot “could have stopped the marina from being built.”

But instead the tribe came to an agreement with the backers of the Elliott Bay Marina.

Muckleshoot tribal members contacted for comment on this story did not respond.

Jones says the owners of Elliott Bay Marina paid the Muckleshoot more than copy million up front and for the next 100 years they will give the tribe 8 percent of their gross annual revenue.

“Anyone who’s in business can tell you that 8 percent of your gross revenues is a huge number,” he says. “It really affects your viability as a business.”

When asked if he had any advice for companies that want to build coal terminals in the Northwest, Jones laughed.

“I’d say good luck. There will be a lot of costs and chances are the tribes will probably negotiate a settlement that works well for them and it will not be cheap,” he responded.

Deal or No Deal?

SSA Marine and Pacific International Terminals—the companies that want to build the terminal at Cherry Point—have lawyers and staff members working to make a deal with the Lummi to get the terminal built. The companies declined repeated requests to be interviewed on the subject.

“I think they’re quite disgusting,” says Lummi council member Julius when asked how he feels about the terminal backers’ efforts to make inroads with the Lummi. “It’s nothing new, the way they’re trying to infiltrate our nation, contaminate it, use people.”

This past summer Julius and the Lummi tribal council sent a letter to the Army Corps of Engineers. The federal agency will have final say over the key permits for the coal terminal.

In the letter the Lummi assert their “unconditional and unequivocal” opposition to the project, and lay out the reasoning behind their position, which centers around threats to treaty fishing rights and the tribe’s cultural and spiritual heritage at Cherry Point.

But there’s a line at the end of the letter, which legal experts and the Army Corps of Engineers say leaves the door open for continuing negotiation on the Gateway Pacific Terminal. It reads:

“These comments in no way waive any future opportunity to participate in government-to-government consultation regarding the proposed projects.”

Diana Bob, the Lummi tribal attorney who was involved in drafting the letter, declined to be interviewed for this series.

This is the second of a two-part series originally published at Earthfix.opb.org. ICTMN posted Part I last week.