A multinational banking giant is backing away from a proposal to build the West Coast’s biggest coal export project near Bellingham, Washington.

New York-based Goldman Sachs has sold its stock back to the companies proposing to build the Gateway Pacific Terminal. If built it would transfer 48 million tons of Wyoming coal each year from trains to ocean-going vessels bound for Asia.

The move comes less than six months after Goldman Sachs published a research paper titled, “The window for thermal coal investment is closing.”

Before the stock transfer, Goldman Sachs had a 49 percent stake in the Gateway Pacific project. The company proposing the project is SSA Marine. Its parent company is Carrix, Inc.

SSA Marine President Bob Watters said in a statement that after Goldman Sachs sold back its stock, a Mexican businessman named Fernando Chico Pardo made an investment in SSA’s parent company that gives him a 49 percent ownership.

Coal-export opponents said the departure of Goldman Sachs as an investor is the latest sign that Wall Street no longer sees a profitable future in mining, shipping and burning coal – considered the dirtiest sources of energy and one of the biggest sources of greenhouse gases that contribute to global climate change.

“Goldman Sachs’ stepping away from coal export is yet another sign from Wall Street that coal export is a losing investment,” said anti-coal activist Crina Hoyer, the executive director of Bellingham-based RE Sources for Sustainable Communities.

SSA Marine and Carrix, Inc., sought to cast the departure of Goldman Sachs in a more positive light. According to their press release, Chico Pardo and the project’s original investors had stepped in with a “substantial capital injection” and remained committed to the coal export project.

Overall, the push to export Montana and Wyoming coal through the Pacific Northwest’s has struggled. Of the six coal export terminal originally proposed in Washington and Oregon, three have been dropped. In addition to the Gateway Pacific terminal on the northern shore of Puget Sound, the two other terminals still being considered are proposed for ports on the Columbia River in Washington and Oregon.

Seattle-based SSA Marine wants to build a terminal within the Cherry Point Aquatic Reserve. It would ship millions of tons of coal from Montana and Wyoming to Asia. The company says it would create thousands of jobs and generate millions in tax and other revenues. 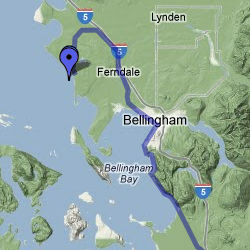 What’s Next: Environmental review of the project is expected to take two years. In July 2013, Washington Department of Ecology, the U.S. Army Corps of Engineers and Whatcom County, Wash. announced they will consider climate change, human health and the environment. They will also look at the entire route from Western mines to coal-burning plants in Asia. The public’s input was a factor in the decision for a broad review. Government agencies took in public comments from close to 125,000 people from September, 2012 to January, 2013. As part of the public-input process, 9,000 people attended seven meetings in Washington in 2012. The government agencies are required to solicit public input before they issue an environmental impact statement and from there, approve development permits. A summary of the public comment can be found here.