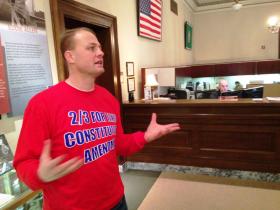 Last year, the Washington Supreme Court tossed out Eyman’s two-thirds requirement for tax increases as unconstitutional – something Washington voters had repeatedly approved. Now Eyman’s back with a creative proposal: he would cut the state sales tax by one cent if the legislature doesn’t approve and send to voters a constitutional amendment to bring back the super majority rule.

“Either they let us vote, which costs them nothing, or we get the largest tax cut in Washington state history,” says Eyman.

A one penny cut in the sales tax would amount to about $1 billion a year in lost revenue to the state. Eyman would need to gather nearly 250,000 valid voter signatures to put his measure on this fall’s ballot.

The 2014 initiative season is also underway in Oregon. Measures on same-sex marriage, marijuana legalization and liquor privatization are all expected to qualify for the ballot.

In Idaho, there are proposed ballot initiatives to raise the minimum wage and allow medical marijuana.