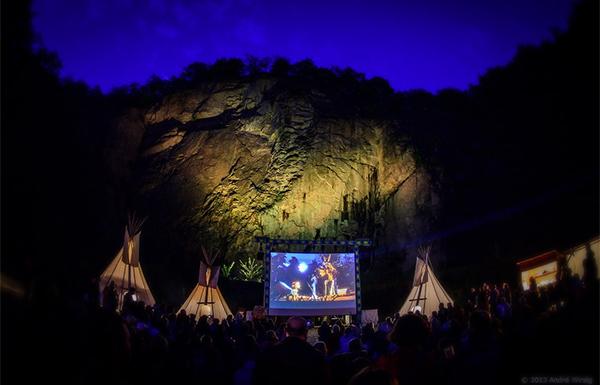 Photo by Andre Wirsig, source: oingfest.com
An outdoor film screening at the 2013 Karl May Festival in Radebeul, Germany.

The festival regularly attracts over 30,000 visitors and will include lecture, dance and song from the traditional and modern everyday life of the Oneida Indian Nation and the Haudenosaunee Confederacy. It will also include film exhibitions each evening. Each film presentation includes a short and feature length film about American Indians.

G-Fest (OING-Fest) was founded by the Oneidas: “Our mission is to promote a world-wide cultural understanding and to bridge creative development and thought regarding American Indians and in particular, the Oneida Indian Nation. We hope to bring the finest new works from International filmmakers on the subject of American Indians fostering the vision that film and storytelling is engaging, and can alter the accepted wisdom of all members of a community.”

In addition to the cultural presentations which include dance, song and storytelling presented by the Oneidas at the fest, films made by and about American Indians will be exhibited. OING-Fest takes pride in honoring great work both in front of and behind the camera. Certificate awards will be presented to the Director, Producer, Screenplay, Cinematography and Actor & Actress of the films selected to be exhibited at the festival. Helmut Reader, Karl May Festival Executive Director says, “the film portion of the OING-Fest presentation is new to our festival, and was an immediate standing-room-only success. We look forward to the films of 2014.”

Those seeking more information are encouraged to visit the OING-Fest site at OINGFest.com or contact Festival Director Jim Loperfido by e-mail at jgl@jglmanagement.com or by phone at 315-335-3541.

The UPCOMING DEADLINE for submission is March 15, 2014.

OING-Fest welcomes a wide range of American Indian stories that reflect personal triumph, diversity, curiosity, and independence. If your film fits the bill, this is the festival for you. Submit your work today!