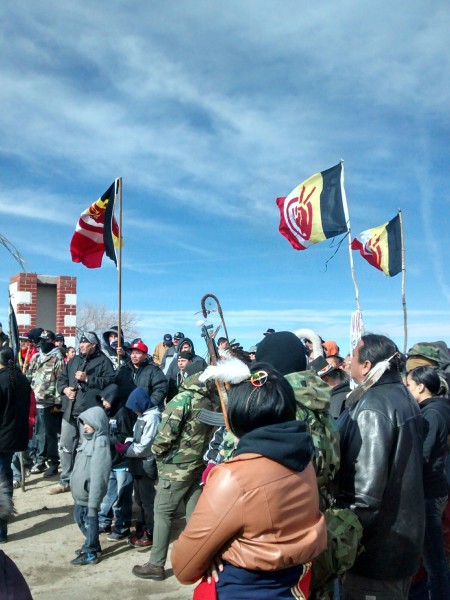 WOUNDED KNEE — Despite wintry temperatures, under a brilliant blue sky, Wounded Knee 1973 veterans, such as Clyde Bellecourt and Bill Means, were joined Thursday, February 27, 2014 with a younger generation of American Indian Movement grassroots members—many of whom were not yet born—to remember the takeover 41 years ago of Wounded Knee.

February 27th is known in Indian country as Liberation Day because it was on that date in 1973 the American Indian Movement (AIM) occupied the Pine Ridge Reservation near Wounded Knee in protest against the federal government and its policies related to American Indians.

A 71-day standoff between federal authorities and AIM ensued. On March 13, assistant attorney general for the Civil Division of the US Justice Department, Harlington Wood Jr., became the first government official to enter Wounded Knee without a military escort. Determined to resolve the deadlock without further bloodshed, he met with AIM leaders for days and, while exhaustion made him too ill to conclude the negotiation, he is credited as the “icebreaker” between the government and AIM.

Both sides reached an agreement on May 5 to disarm, and three days later the siege had ended and the town was evacuated after 71 days of occupation; the government then took control of the town. During the incident, a Cherokee and an Oglala Lakota were killed by the FBI.

Yesterday, those gathered remembered and honored the memory of 1973 Wounded Knee veteran, Carter Camp (Ponca), who walked on in late December with a dinner in Manderson, South Dakota.