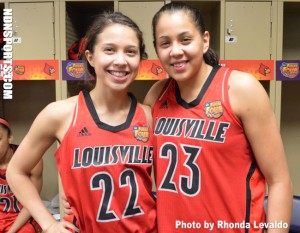 Shoni and Jude Schimmel, members of the Confederated Tribes of the Umatilla Indian Reservation, became the first Native Americans from a reservation to play in the NCAA women’s basketball championship last year, for Louisville (Photo by Rhonda Levaldo/courtesy ndnsports.com).

At the start of this college basketball season, Brent Cahwee wrote about 10 Native American players – well, 11, actually – for fans to keep their eyes on at ndnsports.com.

Now that March Madness is upon the nation, it’s time to remind folks that some of them are still playing. Two of the most notable are sisters Shoni and Jude Schimmel from the Confederated Tribes of the Umatilla Indian Reservation, who play for Louisville – a No. 3 seed in the NCAA women’s basketball tournament.

What hasn’t been said or written about the dynamic duo of sisters that have taken women’s college basketball and Indian country by storm. Shoni, described as a more flashy and “rez” ball style player and Jude, described as a more steady and blue collar player, helped lead the Louisville Cardinals to an appearance in the 2013 women’s national championship game.

(They made) an improbable run through the tournament by beating then-No. 1-ranked Baylor in what was has been called the women’s game of the century. The Lady Cardinals also beat Tennessee and California to reach the championship game, making the sisters the first Native Americans from a reservation to play in the NCAA championship game.

There are others on Cahwee’s list still playing, most notably Bronson Koenig of the Ho-Chunk Nation, a 6-3 freshman point guard at the University of Wisconsin. The Badgers are a No. 2 seed in the NCAA men’s tournament.

One Native star missing out on the rest of March is Marshall Henderson of the Choctaw Nation of Oklahoma, who spent two tumultuous years at the University of Mississippi.

The Running Rebels made waves in last year’s NCAA Tournament, but did not qualify for it, or the NIT, in this, Henderson’s senior season.