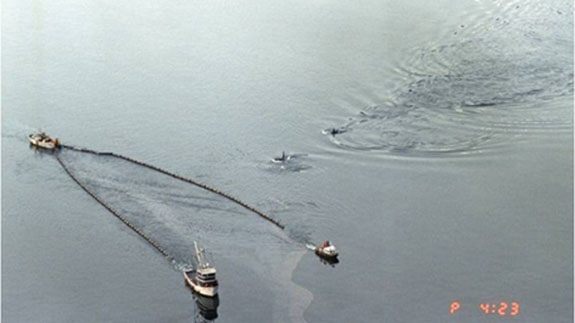 Killer whales swimming in Prince William Sound alongside boats skimming oil from the Exxon Valdez oil spill. Scientists report that orca populations there have not recovered and oil is still being found. | credit: (State of Alaska, Dan Lawn)

25 years ago today the Exxon Valdez, an oil tanker bound for Long Beach, Calif., ran aground in Prince William Sound.

At the time it was the largest oil spill in U.S. history.

Gary Shigenaka and Alan Mearns responded to the Exxon Valdez, and they’ve been studying oil spills ever since. They’re scientists with the National Oceanic and Atmospheric Administration in Seattle.

They told EarthFix’s Ashley Ahearn about their experience responding to the Exxon Valdez all those years ago.

Alan Mearns: Some places we’d go ashore and you’d see starfish that looked like they were sick, they were just kind of drifting around in the surf. And you could smell the oil too, in the places where there was plenty of it. It smelled like benzene, like you’re pumping gas at the gas station and you sniff that little bit of benzene as you pull the hose out of your car.

EarthFix: Gary, how were orcas impacted by the spill?

Gary Shigenaka: Two groups that frequent Prince William Sound crashed immediately after the spill. So since the time of the oil spill those populations have continued to be monitored and we can follow the trends and for the AB pod — the resident pod – there’s been a slow recovery. For the AT1 group, which is the transient pod, it’s been declining ever since the spill and the orca specialist for Prince William Sound, Dr. Craig Matkin, has predicted that that particular group is going to go extinct. It continues to decline with time. So it’s an unfortunate longterm legacy from the spill.

EarthFix: Some people thought the orcas would swim away, would avoid the oil spill itself, but that wasn’t actually the case, was it?

Shigenaka: What we all thought was that orcas are so smart. They will simply avoid the oiled waters. But we’ve got very good photographic evidence that shows that indeed they did not.

One photograph, an aerial photograph, shows orcas cutting through a slick and you can see where they’ve come to the surface right through the oil. There’s another shot of a pod of orcas right at the stern of the Exxon Valdez, right at the tanker.

EarthFix: What creatures were the most impacted or most harmed by the Exxon Valdez spill?

Mearns: Seabirds, mainly seabirds and some shorebirds. And of course that was the big thing you’d see in the news almost every day: pictures of an oiled bird, somebody picking it up, taking it to a wildlife rehabilitation station where they’d clean them and then hold them until they could be released. 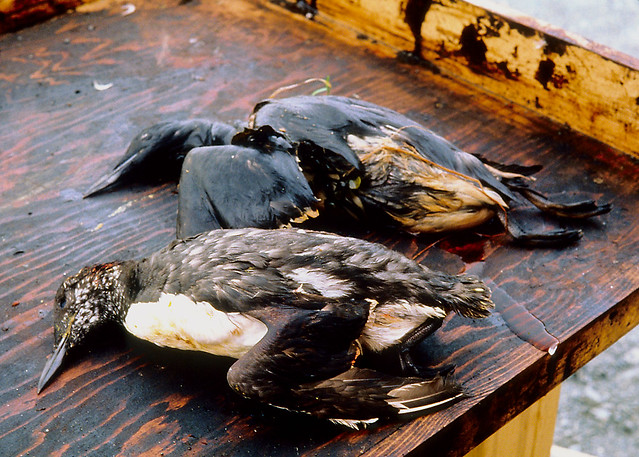 EarthFix: SO for people who weren’t alive, weren’t reading the paper when the Exxon Valdez spill happened, what were those animals going through? What happens to a bird when it interacts with an oil slick?

Mearns: Well, first of all, even though it’s in the spring and summer it’s still cold up there. If it’s not killed by being smothered by gobs and gobs of oil, if it’s a little bit of oil, it will succumb eventually to things like pneumonia-type diseases and things like that, so it suddenly causes birds that had good insulation not to have insulation and start suffering the effects of cold conditions.

Shigenaka: And the same holds true for another of the iconic wildlife species in Prince William Sound: the sea otters. They insulate themselves with that nice thick fur pelt and they are affected in the same way by oil disrupting their ability to insulate themselves during a spill.

EarthFix: 25 years later, how is Prince William Sound? What species have recovered, how does the place look?

Mearns: Well, 14 or 15 species or resource values have recovered. The recovery started a few years after the spill with things like bald eagles. A number of them were killed off but their population rebounded. The most recent recovery was just announced was of the sea otters that we were just talking about. So between 1991-92 when we started seeing reports of recovery of a few bird species and now we’ve had about 14 or 15 species recover but there’s still some others that haven’t yet.

EarthFix: Which ones are you most concerned about, Alan, or scientists are following most closely with concern?

Mearns: The orcas are really the ones we’re most concerned about now.

EarthFix: Is the oil gone?

Mearns: No. There are still traces of oil in the shorelines. When you go out at low tide and go into some of these back bay areas with gravel and sand overlying bedrock and dig down maybe a foot sometimes you’ll hit spots with oil that is still actually fairly fresh. We’ve encountered that at a few sites that we’ve monitored over the past 25 years.

Shigenaka: That’s been one of the 25-year surprises for us is that there are pockets of relatively fresh oil remaining both in Prince William Sound and along the coast of the Alaska Peninsula and that’s something that I don’t think any of us expected 25 years later.

EarthFix: What did this spill mean for your careers? You guys were both young bucks when this happened. And now, 25 years later, when you look back, what did it mean, the Exxon Valdez?

Shigenaka: I think overall, just the notion that we have a responsibility, both as responders and as scientists to try to communicate what we do and what we know in a way that’s understandable to the people who are affected.

EarthFix: There is more oil moving through this region now – more oil coming from the tar sands of Alberta and coming from the Bakken oil fields of North Dakota to refineries here in Washington state. If I talk to you guys 25 years from now, what do you hope we’re talking about?

Mearns: One thing that I worry about and I think Gary has some other things that he worries about is a lot of this new oil is going to be going through the Aleutian Islands, the great circle route, more and more tankers leaving here or in Canada and heading across. And in the Aleutian Islands, we thought Prince William Sound was remote, well the Aleutian Islands are even more remote. Getting equipment there, getting staff, we’ve had a few experiences with spills. I guess I’m concerned that there will be more spills in that region from this increased traffic out there.

Shigenaka: 25 years from now I’m hoping that we have a much better handle on how these novel new oils like the tar sands oil and the Bakken crude oil from North Dakota, how they behave in the environment and what their potential impacts are to exposed organisms because frankly right now we don’t really know how the stuff behaves, both types of oil, once it gets loose in the environment and we’re only beginning to understand what potential impacts there might be for the exposed communities.

Gary Shigenaka and Alan Mearns are scientists with the National Oceanic and Atmospheric Administration in Seattle. They responded to the Exxon Valdez spill 25 years ago.