The Puyallup Tribe of Indians is building a library of genetic material from coho salmon to better understand the different populations throughout the Puyallup River watershed.

“The data behind how all these fish are related can give us a pretty clear picture of how many populations are actually here,” said Russ Ladley, resource protection manager for the tribe. “Are populations that have different run timings independent of each other, or do they interbreed?” 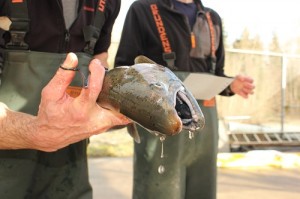 A winter coho is sampled for genetic material on the White River, a tributary of the Puyallup.

Winter run coho migrate through the Puyallup as late as February or even March while the earliest run fish are often seen as soon as July. “There isn’t much time when coho aren’t moving into the freshwater to spawn,” Ladley said.

“I would like to collect an adequate sample so we have a background from which to compare,” Ladley said. “I want to know, for example, if the late time coho we see in the White River are different from early coho we see there.”

“Thirty years ago the state Department of Fish and Wildlife sprinkle planted coho fry throughout the watershed, so I would like to find out if the fish are all the same or are still diverse,” he said.

Much of the Puyallup coho’s historic habitat has been degraded in the past century and is still disappearing, making an analysis of interrelationships vital. Coho salmon spend an extra year in freshwater as juveniles compared to other salmon species, making them more vulnerable to declines in freshwater habitat.

For example, low summer flows have been dropping throughout the watershed for decades. “Coho are their most vulnerable when we get to summer low flows,” Ladley said. “Despite a prohibition of new water withdrawals, we’ve seen a continual decline in summer flows because of unregulated wells being allowed to spread across the watershed.”

Low flows reduce the amount of habitat available for coho rearing and can cut fish off completely from valuable habitat. “When it comes down to it, fish need water to survive,” Ladley said.

“Currently, we see a fairly broad range of return timing and coho utilizing habitat from near sea level to 3,000 feet of elevation in Mount Rainier National Park,” Ladley said. “It will be interesting to learn if this is one homogenous stock or whether clear genetic differences exist.”

“This genetic data will give us a clearer picture of exactly how diverse they are, and hopefully give us information we can use to better manage the stock,” he said.

More information on the decline in salmon habitat in the Puyallup River watershed can be found at: http://go.nwifc.org/puyallup and for all of western Washington, here: http://nwifc.org/publications/sow/