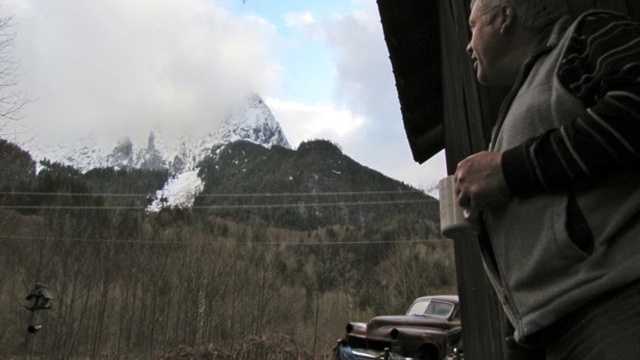 “Maybe that hillside is a danger to me,” says Ben Van Dusen, looking towards the steep foothills of Mt. Index less than a 1/4 mile from his home. “I didn’t think it was but maybe it is.” | credit: Ashley Ahearn

MT. INDEX RIVER SITES, Wash. — The landslide in Oso, Wash. served as a devastating reminder of one fact of life in the Northwest: landslides happen.

In some places, it’s a risk people have learned to live with — places like the Mt. Index River Sites, a loose cluster of homes along the Skykomish River northeast of Seattle in the Cascade Mountains. 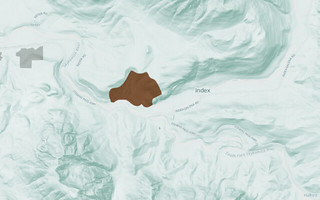 Since December, landslides have destroyed a dozen homes and wiped out the only access road to this community. No one was hurt.

Loren Brayton pushes his camouflage hat back on his head and puts down his chainsaw for a minute to talk. He’s cutting away tree trunks that are blocking the road to his cabin site.

“All that slid last night. I got stuck on the other side,” he said.

Brayton’s family has owned a sliver of rocky property next to Sunset Falls since the early 1970s. He’s building a cabin there that he hopes to retire in someday.

“I’ve spoken with three geologists. I also drilled into the granite and rebarred in. I’m anchored. These guys built on clay,” he says, gesturing at the destroyed homes littering the hillside above where he’s standing, “So they moved. I won’t.”

Surveying the devastation behind Brayton — the hillside a wall of muck and debris, tin roofs folded in half, bits of houses jutting out amidst stumps and mud-slathered couch cushions — Brayton’s sentiments about the viability of his dwelling seem to faintly echo the sentiments of the three little pigs, but Brayton isn’t worried. 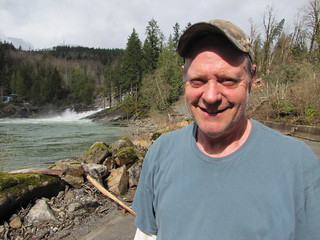 For Brayton, the natural beauty of this place — replete with salmon, bald eagles, osprey and quiet — is worth the risk. But he does acknowledge some parallels with the devastation in Oso, about an hour and a half away. There, the death toll from the March 22 landslide is approaching 30 people.

“For all the people here, there was personal property lost and there was real estate lost. We had no deaths. So I compare this to Oso, but I feel for them more than I do for us. We’ll recover,” Brayton says.

The Skykomish River pounds down over Sunset Falls, a not-too-subtle reminder of how much power water has over this landscape, and how devastating this river can be. Floods occur fairly regularly here, damaging property and forcing people to evacuate. Landslides have taken out other sections of this dirt road in the past.

For the 230 or so people who live on the other side of this slide, ATV is the only way to get in and out. Many of them are without power or water and have been, off and on, for weeks.

But the access road is private so there’s no government money available to fix it. Since December the community has spent close to $60,000 clearing landslide debris off this road again and again.

“I watched our contractor for two months dig one lane through. Faster than he could put it in his dump truck and haul it away, more would come down,” says Lynne Kelly, who has lived here for 30 years and now serves on the community board. “It just keeps coming down and I think people have finally figured out that at some point it has to stop. There is no money.” 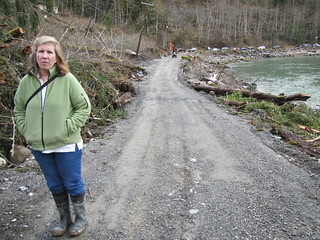 The community has fought over what to do about the road — whether to keep clearing and repairing it or give up altogether. They’ve gone to court over how the costs of road maintenance should be divvied up among residents. There’s talk of building a bridge over the Skykomish so that people who are blocked in on the far side of the slide can have another means of accessing Highway 2.

But that would cost almost half a million dollars, and there’s not enough money in this community to pay for it. Kelly’s not optimistic about the chances of getting a loan. “For Sale” signs dot this dirt road.

“People are just wrapping their heads around evacuating and changing their lifestyle and as much as I hate to say it, the Oso slide has been a big wake up call,” she says.

Moving elsewhere isn’t an option for everyone. Ben Van Dusen sits in a lawn chair looking out over a collection of old cars slowly rusting in the rain. When the clouds part briefly, out pops craggy white Mount Index towering over his property. Van Dusen has a million-dollar view, but when he bought this little house 19 years ago he paid less than $60,000 for it.

“It’s like standing below Yosemite or the Matterhorn and I never get tired of looking at it,” he says, sipping his tea.

Life may be beautiful here, but it hasn’t been easy. In the past Van Dusen has had to evacuate because of flooding. Landslides took out the road a half-mile away in 2009.

“This is a dangerous place and that’s become much more apparent to me now. Maybe that hillside is a danger to me,” he says, looking towards the steep foothills of Mount Index less than a quarter-mile away. “I didn’t think it was but maybe it is.”

But Van Dusen says he can’t afford to leave. He delivers magazines and is starting to get some gigs as an actor, but things have been really hard since the recession.

“I’m about ready to go under. I turned the hot water off. I’m living without hot water. I don’t have TV, Comcast, I don’t have any of that. I get DVDs from the library. I use Wi-Fi in town for Internet access so I’m cut to the bare bones here,” he says.

Van Dusen says that as much as he loves the quiet and the wild spirit that drew him here in the first place, he wishes the government would buy all the residents out. People were meant to visit, not live here, he says.

“I would relocate maybe to Skagit County or somewhere out in the flatlands,” he says. “Someplace where I could grow some food and work on these cars.”