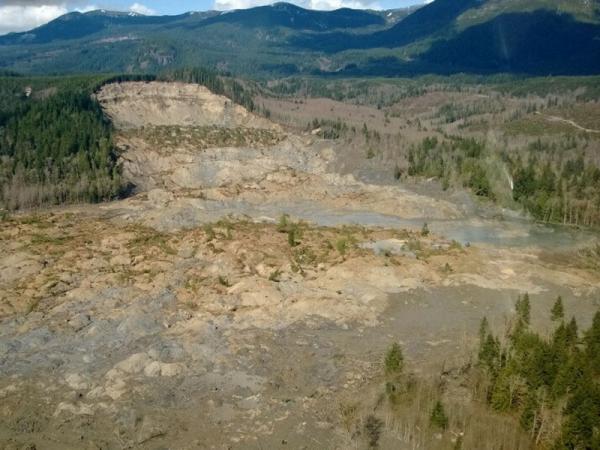 File photo of the massive landslide that hit Snohomish County in March.
Office of the Governor Flickr

Washington Lands Commissioner Peter Goldmark is speaking publicly for the first time since the Oso landslide in Snohomish County.

The two-term Democrat suggests anti-logging interests want to use the disaster to advance their cause.

Goldmark is indignant in the wake of news reports that have focused on past logging on the plateau above the Oso landslide.

He went on to say his agency’s prime focus right now is to help with the recovery effort and monitor the slide zone for further movement.

He says there will be studies later to determine the cause of the deadly collapse of the hillside. In the meantime, Goldmark calls any speculation that logging played a contributing role “disappointing.”

“There are certain critics, and I’ll leave it at that, who are opposed to timber harvest and so some of them seize on the opportunity to advance that view in the context of the emotional response around a terrible tragic event,” said Goldmark.

“Respectfully, it’s extremely disappointing that our elected lands commissioner would accuse some of us of this,” says Peter Goldman, head of the Washington Forest Law Center. He’s also been a Goldmark campaign contributor.

“I turn the question back to the Commissioner,” adds Goldman. “Why would we not use the principle of precaution and stay out of these areas. We’re talking about lives here and not just fish.”

Commissioner Goldmark says there are no plans for a moratorium on logging in areas similar to where the Oso slide happened.

Goldmark was first elected in 2008 with the strong backing of environmentalists following another high profile landslide. The so-called Stillman Creek slide in southwest Washington put a spotlight on the controversial practice of steep-slope logging and helped catapult Goldmark to office.