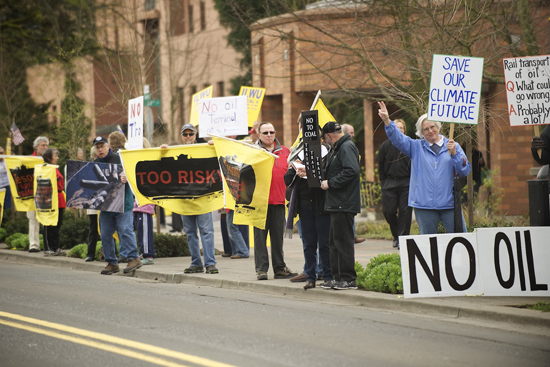 Protesters opposing an oil terminal at the Port of Vancouver gather Wednesday outside the Clark County Public Service Center before a meeting there of the state’s Energy Facility Site Evaluation Council. | credit: Troy Wayrynen/The Columbian

The Washington state board reviewing what would be the Northwest’s largest oil-by-rail terminal will undertake a sweeping analysis of the facility’s environmental effects — from the extraction of the oil to its ultimate consumption.

The environmental review for the proposed $110 million Tesoro-Savage oil terminal will consider impacts well beyond its location at the Port of Vancouver, the state’s Energy Facility Site Evaluation Council unanimously decided Wednesday.

Opponents of the oil terminal said they were heartened by the decision, while the project’s proponents remained unfazed.

“It’s generally encouraging that they’re looking at impacts outside of Vancouver throughout the state of Washington and the region,” said Dan Serres, conservation director for the environmental advocacy group Columbia Riverkeeper. “As the process moves forward, we’re going to be looking for more specifics.”

The general manager of the proposed terminal, Jared Larrabee, said Tesoro Corp. and Savage Companies have known since they first filed their application with EFSEC last summer that the council’s review would be “very robust.”

“We’re fully on board with going through that process,” Larrabee said.

The proposed facility would generate 250 temporary construction jobs and 120 permanent jobs, according to the companies, and boost local and state tax revenues.

EFSEC, a state council created in 1970 to address controversy over the siting of nuclear power plants, is reviewing the terminal proposal before making a recommendation to the governor, who has the final say.

The council consists of a governor-appointed chairman and an employee each from five state agencies. During deliberations on the Tesoro-Savage proposal, Vancouver, Clark County, and the state Department of Transportation have representatives on the council, as does the Port of Vancouver, which approved a lease for the project.

Although the council’s Wednesday work session was public, the council did not take comments. Instead, the council chewed over a summary of the 31,074 overwhelmingly critical comments it had already received about the oil terminal proposal.

Since they knew they wouldn’t be able to speak directly to the council, about 50 opponents gathered outside the Clark County Public Service Center in downtown Vancouver before EFSEC began its meeting there.

“I’m hoping that everyone who is going to be inside will see we are out here and we care. We’re very concerned about the environment and safety,” protester Victoria Finch said. She lives close to the rail line that would supply the terminal with as many as 380,000 barrels of crude a day.

“We want EFSEC to turn it down. If they don’t, we want the governor to turn it down,” said protester Lehman Holder, chairman of the local Sierra Club chapter.

Opponents have argued the environmental impact statement should include the effects of greenhouse gas emissions — not just from the transportation of the oil to and from the terminal and its daily operations, but also from consumption of the oil.

Toward the end of the council’s meeting, EFSEC member Christina Martinez asked how far the environmental study’s consideration of greenhouse emissions would go.

“There’s some question of whether it fits into an area that’s speculative,” Chairman Bill Lynch said. “Some general analysis is appropriate because, obviously, burning fossil fuels creates greenhouse gases.”

“It came up quite a bit in the scoping comments,” she said. “There’s a way for us to do that in the document without going to the nth degree.”

Don Steinke, who organized the pre-meeting protest, was taken aback.

“The biggest impact was almost an afterthought: the emissions from burning the fuel they’re shipping out,” he said.

Another Vancouver resident who has been tracking the oil terminal proposal was more upbeat.

“Listening to the tone of the board is encouraging,” said Eric LaBrant, who lives in the neighborhood closest to the proposed terminal. “They’re looking at details and asking questions. I’m going to be breathing those details — benzene and hexane and carbon monoxide. My kids are going to be breathing that when they’re taking spelling tests and riding their bikes.”

EFSEC staff can’t yet say how long the environmental review will take, let alone how long it will be before the council forwards its recommendation to the governor on whether to approve the oil terminal. The council will discuss the time line more specifically at its regular meeting April 15 in Olympia.