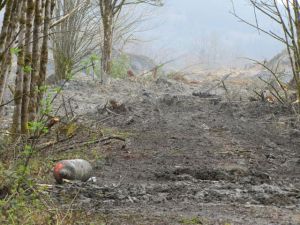 OSO, Wash. — An orange backhoe beeps in the background as cleanup workers and search dogs slog through the gray-blue clay of the Oso landslide zone. In the distance a muddy American flag waves over hummocks of exposed roots, broken trees and the remnants of the 42 homes that used to line this stretch of highway in the Cascade Mountains northeast of Seattle.

The death toll stands at 30 with 13 people still missing. Dozens of homes were destroyed.

As the search-and-rescue-effort shifts gears into cleanup mode, officials are beginning to assess potential environmental and public health risks.

“Personnel, even canines, when they come off the site they’re going to get decontaminated,” said Maj. William Pola with the Army National Guard. Behind him workers pressure wash massive trucks with hot water and mild detergent as they leave the landslide zone.

Other responders somberly wash off their boots nearby. It’s a standard precautionary measure, said Dick Walker, a spills expert with the Washington State Department of Ecology.

But there is a lot of mud here – enough to fill Safeco Field three times.

“But really that’s very minimal with the volume of soil that has been dumped on that and spread around and some of this is extremely deep and some of that material we may never recover,” Walker said. 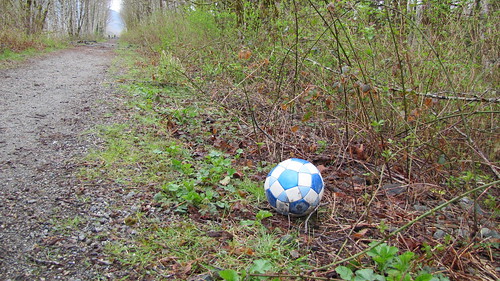 Along a trail by the Stillaguamish River a child’s soccer ball sits in the rain.

When the slide hit, families were going about their usual Saturday mornings -– kids playing in the woods, parents mowing lawns.

Most of the dead have now been removed, though there are still people missing.

“We have a potential exposure for blood and body fluids but whatever we had was diluted in over a million cubic yards of dirt so the risk to the individual rescuer going in is really quite small,” said Dr. Richard Bradley, a physician with the Federal Emergency Management Agency on a recent visit to the disaster zone.

Rescue workers are more likely to injure themselves clambering around the debris field, he added, than through exposure to any hazardous materials or organic material.

The mud tumbled 600 feet down the mountainside and blocked the Stillaguamish River. Then it continued south, burying the neighborhood on the other side.

“It pushed everything away from the river,” Walker explained. “So most of the hazardous waste items are back away from the water’s edge, vehicles, too and because of the slope of the land we don’t believe that anything’s going to get into the river from the chemical perspective.”

Walker added that Ecology has taken some water samples downstream from the slide zone and has not found evidence of chemical contamination. More sampling will be done in the coming months. 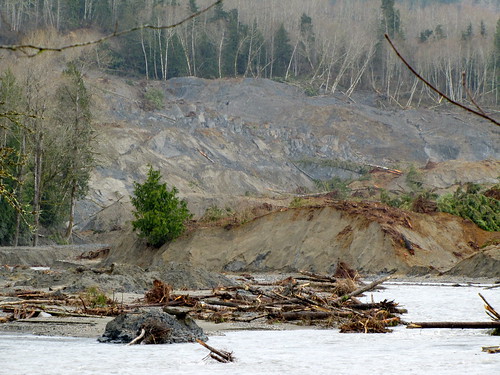 The river looks different. Springtime in the Northwest means blue-green rivers, frothing with snowmelt. Right now the Stillaguamish is a morose gray, littered with broken trees.

All that muck and debris will harm the salmon and steelhead that spawn in this stretch of river. But fish experts says it’s too soon to say how much those populations will suffer.

For now, the focus remains on the overwhelming loss of human life along this ravaged stretch of the Stillaguamish.