You may remember we posted a story about Laguna Woman, a new character that was going to be featured in the Super Indian comics by Arigon Starr. Ms. Starr took some time out from her busy schedule to tell us how Super Indian started and what inspires her with all her projects.

One thing I would really like to promote is that “Super Indian” is more than a weekly webcomic. It started life as a comedy radio series in 2007, thanks to the Native Radio Theater Project and Native Voices at the Autry. The show was broadcast nationally through the Native Voice One radio network and American Indian Radio on Satellite. There were only ten five-minute episodes produced — but I had WAY more stories. That’s when I decided to do the comic book. 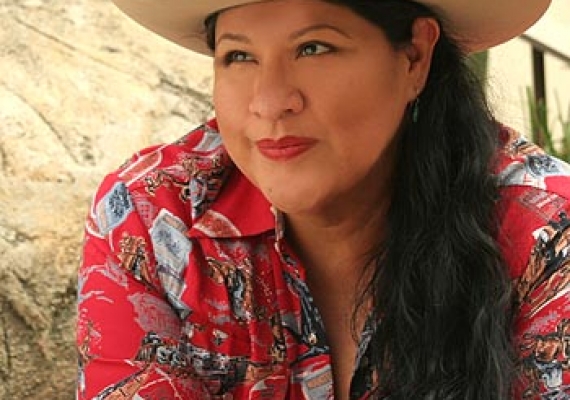 Because I finally had enough material, I released “Super Indian Volume One” in May 2012. The 64-page full-color book features “Super Indian” issues #2, 3 & 4, plus extras like features on Jim Thorpe and Maria Tall Chief (“Real Super Indians”). The book is available through Amazon, the Super Indian Comics Website (Paypal), plus for all digital devices (Kindle, Nook, etc.) from Amazon and ComiXology.

“Super Indian” led me to Lee Francis IV and the Wordcraft Circle of Native Writers and Storytellers. During a writing conference in Cherokee, NC, we joking talked about the old “Comics Code Authority” that used to police the comic book world back in the 60′s & 70′s. We thought, “Wouldn’t it be funny to have a logo that vetted Native American comic book stories? That way, people would know that the stories and art came from actual Native writers and artists.” That idea became the Indigenous Narratives Collective, which now has a bunch of Native comic book writers and artists from all over Indian Country involved. Our first group comic, “INC’s Universe #0″ had contributors Roy Boney, Michael Sheyahshe, Beth Dillon, Ryan Huna Smith, Theo Tso, myself — plus an introduction from comedian Charlie Hill. Charlie is a big fan of comic books and loves “Super Indian.”

Also — some folks might already know me from my music. I’m the artist behind the song, “Junior Frybread,” which was “Song of the Year” at the Native American Music Awards in 2002. Believe me, I STILL perform that song at every gig. I’ve released four music CDs since 1997. I’ve also had the pleasure of singing at Gathering of Nations (when they used to do shows in Pit), a bunch of colleges, universities, museums and in England and Australia.

I’m also a produced playwright and actor. My one-woman comedy with music, “The Red Road” was featured at the National Museum of the American Indian in New York City and Washington, DC, the Gilcrease in Tulsa, the Youth Theater Festival in Adelaide, Australia after making a debut at the Autry National Center. I had a lot of fun working with the folks at Native Voices at the Autry and starred in many of their Equity Productions.

Believe me — with all of those activities, there is never a dull moment around here. I’ve got at least three more comic book projects in the works that I’m juggling right now. The Indigenous Narratives Collective will be releasing the first volume of “Tales of the Mighty Code Talkers,” which tell stories from all the tribes that participated in the military program. I’m writing about the Choctaw Code Talkers of World War I — and there will be other stories from Native writers & artists in the book. I’m also developing “The Saga of Henry Starr,” which is based on Robert J. Conley’s novel of a real Oklahoma outlaw. Yes, Henry is one of my ancestors….we have a lot of outlaws in my family! Mr. Conley is a renowned Cherokee historian and professor who’s written hundreds of westerns and novels based on Cherokee history.

As for Laguna Woman, she’s set to figure prominently in Issue #6 of “Super Indian.” Working with Shayai Lucero was a real treat. I had met her years ago when she was Miss Indian World and we kept in touch. FYI, Lee Francis IV from INC and Wordcraft is the son of legendary writer Lee Francis III. Lee III started Wordcraft over 25 years ago as an non-profit organization to help mentor Native writers. The Francis family is also from Laguna Pueblo and I really wanted to honor the work that Lee and his father have done for the community. That’s why Laguna Woman, aka Phoebe Francis, has that name. It was important to Shayai, Lee and me to make sure that Laguna Woman was not a stereotypical super-hero.

“Super Indian” will continue to keep the humor coming, plus the social commentary. I’m sure folks who look in at Pow-Wows.com know all about “blood quantum” and can see the humor in a vampire who wants to become a full-blood Indian by biting full-blood Indians. How else do you get a CDIB card these days? AAAY!

Hope that helps! This might actually be a good guest blog, ennit? AAAY!

P.s. I’m a tribally enrolled with the Kicakpoo Tribe of Oklahoma. I’m Buffalo and Uskas Clan and my Indian name is Makedeothecua. My mom is an enrolled Muscogee Creek. Her mom was Cherokee and Seneca. When I grow up, I want to be a Pow-Wow announcer. AAAY!