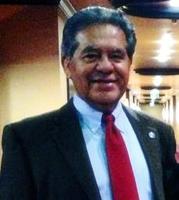 Lawrence SpottedBird will take over as general manager of STA on Monday, April 14. (Photo by the Sitka Tribe of Alaska)

The Sitka Tribe of Alaska has hired a new general manager. Lawrence SpottedBird, currently of Washington State, will start work on Monday.

STA’s previous manager, Ted Wright, resigned in October, after about two years on the job. Tribal Attorney Allen Bell has been serving as the interim manager since then.

Speaking with KCAW on Thursday, SpottedBird, a member of the Kiowa Tribe of Oklahoma, said he has spent the last 34 years working with tribes and Native American entrepreneurs on business and economic development. He currently runs a consulting firm, SpottedBird Development.

SpottedBird has also spent time in Southeast Alaska: from 1999 to 2000 he served as general manager of Shaan Seet, the village Native corporation in Craig, on Prince of Wales Island.

“Getting a solid footing financially and budgetarily is very important,” he said. “So I will be focusing on looking at ways to address the budget and financial situation that any tribe – or any government really – faces around the country.”

Baines said the Council received about sixteen applications for the position, and flew in three finalists for interviews. All of the finalists came from outside of Sitka.

SpottedBird will be formally introduced to the Tribal Council and public at 6 p.m. next Wednesday, April 16, at the Sheet’ka Kwaan Na Kahidi, immediately before the council’s regular meeting.