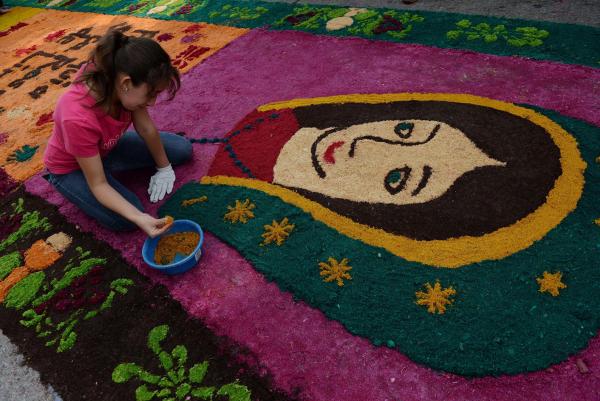 For 2000 meters or 6,600 feet, the world’s longest sawdust carpet spreads down the main avenue in Guatemala City, Guatemala’s historic center.

In preparation for Easter, thousands of Guatemalan Catholics constructed the carpet over the course of seven hours and began working on it early Thursday morning, The Global Press said. They used 120,000 pounds of sawdust to create what’s considered a piece of temporary art.

“Thanks to all who have made possible the longest sawdust carpet in the world,” said Archbishop Oscar Vian, who joined a procession in which youth volunteers carrying two images of Jesus passed over the multi-colored surface.

This is the second time that the city has united to create the multi-colored carpet which is made of sawdust, vegetables, flowers, tree bark and other natural elements.

“At a moment when Guatemalans unite and take on a common objective, we can demonstrate great things,” Victor Martinez, member of Guatemala City’s municipal council, told The Global Press.

The city broke it’s own Guinness Book of World Records title for the world’s longest sawdust carpet. Last year, the city created its first record-breaking carpet as an initiative to invite Pope Francis to visit. But, the pope has not yet confirmed if he will come.

Watch some of the volunteers construct the carpet in the video from Mail Online below.