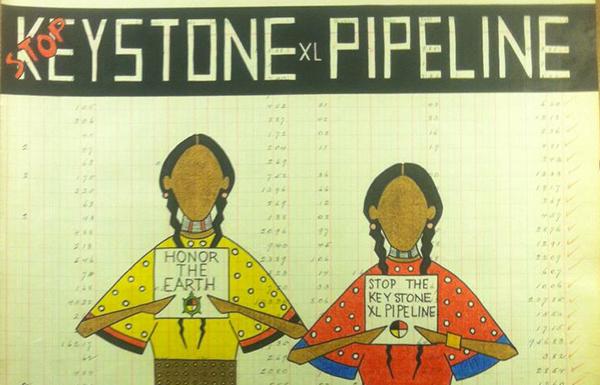 Power is in the earth; it is in your relationship to the earth.

The Earth will be fine.

Humans are such an arrogant bunch—“We’re killing the Earth. We’re destroying the Earth.” No you’re not. Shut up. We can’t do that.

Some folks have a God complex.

The Earth is our Mother—she ain’t going no place. In fact, Earth is an Indian mom; powerful, resilient, beautiful and will survive the very worst that the universe can give. Sure, she had it rough early on, but she’s got that elasticity in her skin. “Ancient Native Secret”—those damn brown skinned Natives, they age so well. But like many Indian moms, Mother Earth hasn’t always been appreciated right; she’s been knocked around a little bit.  Quite a bit. Domestic violence is prevalent within our communities. And like a lot of Native moms, folks won’t understand her TRUE beauty, until it’s too late, until that moment when they realize that they won’t get a chance to see her anymore.

But it won’t be because she’s gone. She’ll be fine—she ain’t going no place. It’s us human beings that are in trouble. Our children. Our grandchildren. We’re effing up THEIR prospects.

I’m thankful for all of the people—Native AND non-Native—who have been diligently working to stifle and defeat the Keystone XL pipeline. I’m proud to see Natives who understand that our biggest battles aren’t in blogs and classrooms, but in our homelands—those homelands are the very ESSENCE of being Indigenous (as opposed to simply being legally “Indian”). We must protect those homelands at all costs—thank you, warriors, brothers, sisters, aunties, uncles—for fighting for all of us. Thank you for being there and taking a stand.

Thank you Dallas Goldtooth for looking all handsome and shit and speaking eloquently and moving your eyebrows powerfully.

Thank you beautiful and brilliant Aunties Faith Spotted Eagle and Winona LaDuke for CONTINUING to be the voices of reason within Indian Country. It’s sad and ironic—these brilliant sisters who are calling for the most reasonable solution to the current crisis in our homelands—are called “radicals.”

You are powerful women. Our lifegivers. Our life sustainers.

There are many more. Thank you to the artists who are taking a stand and giving support to the folks on the ground. For example, John Isaiah Pepion, Blackfeet Ledger Artist, was compelled to action on these fracking and drilling issues when the Blackfeet Tribal Business Council passed a resolution approving the drilling of one of the Blackfeet Holy Sites—Chief Mountain. Pepion said, “It broke my heart—we as a Blackfeet nation—have had oil development for over 100 years and it’s never benefited us. We just get ripped off and it causes a lot of damage to our waters. Illegal dumping from these fracking sites…”

Thank you. Let’s keep up the pressure. Keep supporting our warriors.

Our artists have also joined us. This resistance isn’t new—many Native people have been fighting it for many, many years. In fact, these many brothers and sisters who have taken on this fight on behalf of Mother Earth are fighting the EXACT SAME fight for our precious homelands that we’ve been fighting since Europeans first landed on these shores. We are simply small cogs in this multi-century fight; now, it has ZERO to do with skin color or race. We now have some white allies—the descendants of those who fought against our Native ancestors. We also have some Native adversaries—many of our people are just as prone to scorch the Earth for filthy lucre. There are many Natives who are bought and paid for and whose homelands are suffering from this damage to Mother Earth.

This is a call to action. Right now, the State Department has THANKFULLY delayed approval or rejection of the Keystone XL Pipeline again. That’s positive—that means that all of the actions of Dallas and Faith and Winona and the Niimiipu Tribe and Cheyenne River, Oglala Lakota, Honor the Earth, Owe Aku, and Protect the Sacred and John Pepion and MANY MANY others are paying off. There are literally tipis on the National Mall right now full of Native people taking a stand against the Keystone XL.  Thank you.  You’re making a mark. We have to make a mark—this is about the very essence of Indigenous life—our mother. Our land.

It’s not enough. We have to continue to work, sign petitions, put pressure on, make coalitions. Small steps—John Isaiah Pepion is committing a percentage of all earnings from his ledger art prints above to help this fight by directing it to Honor the Earth and Stronghold Society. Buy a print. They’re beautiful and powerful.

Small steps. Put one foot in front of the other. This is Native power. This is a fight worth fighting and worth winning. For our kids’ sakes.

Get involved. Call your legislator. Encourage NIGA, NCAI and every other Native organization to take a strong stand on this IMMEDIATELY—economic development is cool and important, and it’s good that we’ve worked on those fights. We also, however, have to make sure that we’re protecting our traditional ways of life and being. Our nations absolutely gotta have money, true, but these kinda fights are the very things that make us Indigenous and what we gotta have money FOR! Show these grassroots warriors your support. This fight ain’t over and we really REALLY could win this. The Earth will be fine, but our kids need this. Happy Earth Day.