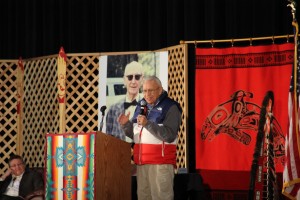 Nisqually elder Billy Frank Jr., a lifelong fisherman who led the battle for Treaty Indian fishing, speaks to an audience of tribal leaders past and present, activists, but most of all friends, remembering the Boldt Decision with stories this last February. Photos of “The Old Swede,” as Billy called Judge Boldt, hung as a backdrop in memory of his momentous decision. Andrew Gobin/Tulalip News

In the early hours of May 5, after a lifetime dedicated to protecting treaty rights of northwest tribes, Billy Frank of Nisqually dies at age 83. He is known for championing the battle for Treaty Indian fishing in the 1960s and 1970s, which culminated with the momentous Boldt Decision. He remained ceaseless in his work as chairman at the Northwest Indian Fish Commission (NWIFC) to protect and preserve the salmon resource in all aspects, continuing his work until his final day. The nation mourns the loss of a great man.

In a White House press release, President Barack Obama said this, “I was saddened to learn of the passing of Billy Frank Jr. Today, thanks to his courage and determined effort, our resources are better protected, and more tribes are able to enjoy the rights preserved for them more than a century ago.  His passion on the issue of climate change should serve as an inspiration to us all.  I extend my deepest sympathies to the Nisqually Indian Tribe, and to Billy’s family, and to his many friends who so greatly admired him.”

Tulalip Tribal Chairman Herman Williams Sr. said, “He’s always been that symbol of our relationship with the state and federal government. He’s the one out in front, leading the fight.”

As serious and determined as he was, Billy was exceedingly humble. He was a man of the people. Wherever he went, he seemed to know everyone, and was always thrilled to see his friends and relatives. He spoke frankly, and was never afraid to speak his mind and say what he knew to be right.

Terry Williams, who worked closely with Frank through the Tulalip Natural Resources Department, said, “Billy had a saying I just loved. He’d say, ‘You have got to tell the truth and recognize the truth.’ That’s what we have faced all our lives.”

Billy Frank spoke from the heart with passion and tenacity. He was revered for his words and what they accomplished.

U.S. Sen. Maria Cantwell, who sits on the Senate Indian Affairs Committee, told the Everett Herald, “Billy Frank was a legend among men. Today, America lost a civil rights leader whose impact will be felt for generations to come.”

His death comes in the middle of a crucial discussion in Washington State that will change the way salmon are protected. The Fish Consumption Rate and the pollution rate are issues to be decided this year. If he were here, his words would be to stay the course. The battle doesn’t stop with the rights, it continues for the survival of the resource.

February 12 of this year marked 40 years since the Boldt Decision. At a celebration at the Squaxin Island resort remembering the battle for Treaty Indian fishing, Frank highlighted how the future of tribes is intertwined with the future of the environment. He said, “We have to protect the salmon. Look at California. The tribes there have the first water right, but there is no water. We have a right to the salmon, but if there are none, what kind of right we got?”

Tulalip Chairman Williams agrees that the fight must continue, but people have to pick up where the old leaders have left off.

“Where will the next Billy Frank rise from?” he said.