The Stz’uminus (Chemainus) First Nation has enacted a blockade that spans its traditional territory in the Gulf Islands of BC. They say they’ve been let down by a recent Department of Fisheries and Oceans (DFO) policy decision to restrict their ability to culture geoducks, a hugely valuable clam species that is already harvested commercially in the area.

“We’re trying to send a message to DFO,” says Ray Gauthier, CEO of the Coast Salish Development Corporation and the man behind the blockade. “If you’re not going to acknowledge our interests… then we’re going to reclaim the area.”

Nobody from DFO was made available speak with VICE, but the agency sent a statement, saying: “Officials are engaged in ongoing discussions with the Stz’uminus to understand their concerns and interest.”

It’s the “ongoing” part that has enraged the First Nation.

Six years ago they applied for permission to conduct a 100-hectare geoduck aquaculture operation in the waters off their reserve near Nanaimo. The undeniably phallic clams grow up to a metre long, and can sell for $50 a kilo to Asian markets.

Band officials saw the lucrative geoduck harvest as a chance to build the local economy and make the reserve more self-sufficient.

“We don’t have our hand out here,” says Gauthier. “We’re not asking for money.” 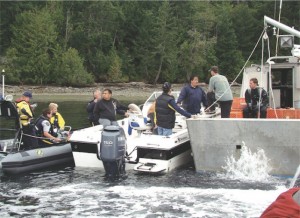 But the plan stalled. Then, after two years of frustration, the First Nation blockaded commercial operations in Kulleet Bay in 2010, preventing the divers from getting in the water. “The message was, if we can’t have access to the industry, then neither can you,” Gauthier recalls. 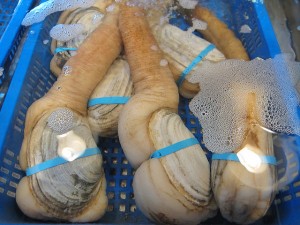 They threatened to blockade the bay again the following year, but the commercial geoduck harvesters steered clear. A few weeks ago, the First Nation was given a one-time opportunity to apply to harvest in five hectares. They say it’s not enough. “This new policy that was supposed to address aboriginal interests simply doesn’t,” says Gauthier.

Now they’re blockading much more than just one fishery in just one bay: they’re planning on blocking access to “all vessels including but not limited to commercial fishing vessels, DFO vessels and any non-native civilians and government officials,” within their traditional territory. That territory spans from Active Pass to Gabriola Island, heavily used areas in the Gulf Islands.

Gauthier says the issue is that the government is shirking its duty to consult with First Nations prior to making decisions regarding resources they have the right to use. “It doesn’t mean you have a meeting and it’s all good, he says. “They’re having trouble with the concept.”

That alleged failure to consult has attracted the interest of “10 or 12” other First Nations. Meaning, depending on the outcome, this protest could grow. No confrontations have occurred yet, but Gauthier says the blockade is in full swing.

“In our world it’s already begun,” he said.